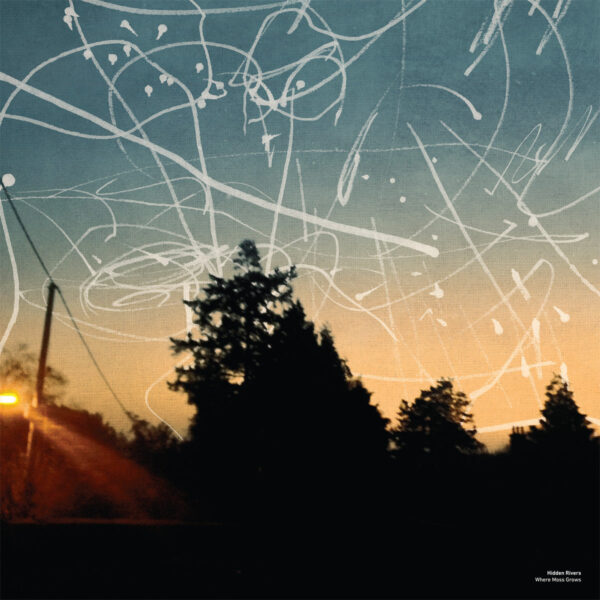 Hidden Rivers is Welsh player Huw Roberts, who has also recorded as Guruyu and Opiate and as one half of Nest with Otto Totland, and he has worked behind the scenes at Serein Records as well as appearing on a few releases there himself…Where Moss Grows (SEREIN SERE008) appears to be his debut under his real name, and it’s a touchingly simple set of synth instrumentals, very melodic in nature, and blending soft-focus wistful pastoral tunes with touches of contemporary ambient drone washes.

At all times he attempts to evoke “a place walled with limestone, of dell and cave, forgotten railways…”, as nostalgic a description as we’ll ever get of the Welsh countryside in some non-existent idealised time zone occurring somewhere between the end of the first World War and the first episode of The Goon Show. This idealisation extends to the front cover art, as you can see…astral phenomena dancing over a sunlit forest scape, and there are further half-faded photos with more uncanny superimpositions inside the digipak, stirring distant childhood memories in the mind’s eye of the beholder. Tracks titles are equally poignant, such as ‘Red The Sun’s Cold Disk’ and ‘September Sun Memory’, indicating a mind preoccupied with the skies, the seasons, and the yearnings of nostalgia for times past.

While there’s undeniably a rather “tasteful” surface to this album, it’s still a grower, and if you give it time to cast its witchery you’ll be reluctant to take it off. Parts of this album have a vague 1970s BBC-TV vibe, and did make me wonder if Huw Roberts might make a contender for the Ghost Box label, but he isn’t as contrived as many of the creators in that particular bag, nor as overtly weird or “hauntological”, if that latter term still has any currency. Huw Roberts is straightforward, clearly sincere about his aims, and has a skill and craftsmanship in programming his keyboards and drum machines that is remarkable; there’s a clarity of sound, and a real lightness of touch in execution, which is a rare thing. From 15 October 2015; vinyl, CD and download editions available.