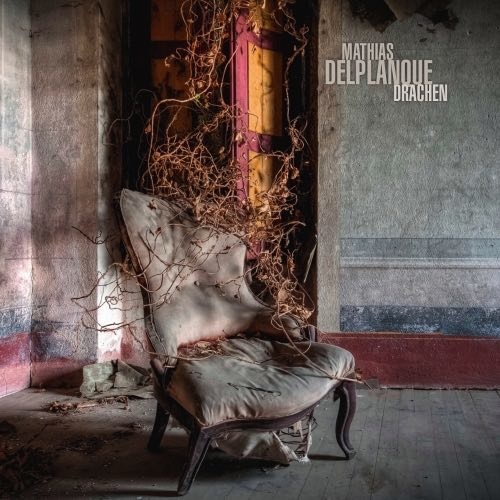 French sound artist Mathias Delplanque shows up here quite frequently…he didn’t quite land a haymaker with his confusing Parcelles 1-10 album in 2010, but he was represented on the Nantes Is Noise free-for-all noise jamboree, then fell back into ordinary tastefulness on Chutes in 2014. For his Transmissions that same year, he did the electro-acoustic thing with some textile factory recordings, somehow managing to smooth out all the rough edges and eliminating the hoped-for rattling noise from those automated looms. He is now here with Drachen (ICI D’AILLEURS MT06), a rather intriguing set of slow instrumentals that seem to represent his idea of what stoner / doom rock might sound like, if it was played in a drawing room or salon by some well-meaning but uninformed librarians wearing stiff Edwardian clothes.

It’s been assembled by him piling up the guitars, basses and pianos on the recording unit and applying a degree of live processing, and through it he hopes to transcend the rough edges of the sound quality to achieve a “beautiful melancholy”. We’re informed by the press notes that his usual method is to spend a long time – perhaps too long – honing his work to perfection in the production stages, but here he decided to go against his own rules and shoot for a bit of spontaneity, deliberately coarsening things up with some natural grit, and letting the rhythm of the overdubs provide its own compelling momentum, to which he would surrender himself.

He still didn’t succeed completely in this bid for freedom and wild unfettered music…you can tell that fundamentally his are the tame notions of a control-freak flirting with madness and danger. But the results are still surprisingly compelling. It’s a kind of orderly mess, rubble arranged in neat piles, classified and curated by a little man with a whisk broom and spectacles, muttering to himself. The title means “dragons” in German, another clue suggesting that the artist would like us to believe he’s “playing with fire”, or perhaps taking us to the far corners of the ocean chart where the legend reads “here be dragons”. The baroque cover art, depicting eerie tendrils springing out of a Regency armchair, also suggests mild insanity and the disruption of comfort. The release is another in the series called “Mind Travels” from this label, a series which has also included Stefan Weso?owski, Manyfingers, and Geins’t Naït + L. Petitgand. From 7th October 2015.