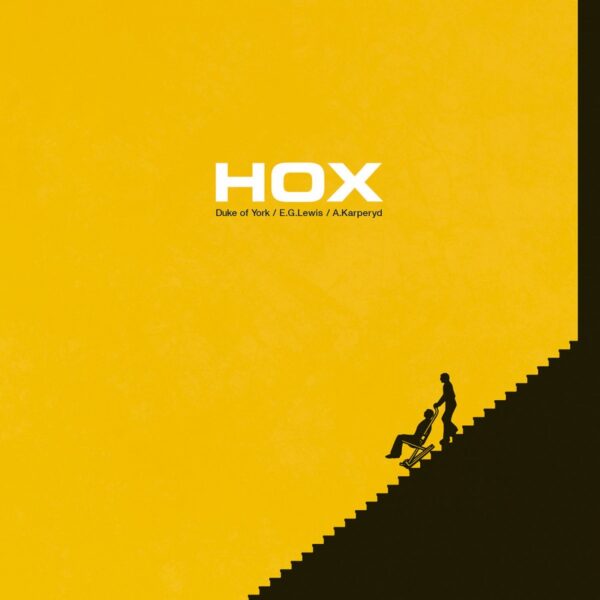 Here’s Edvard Graham Lewis from Wire and Dome appearing as one half of HOX, impressively maintaining a very high standard of alienated, unsettling avant-pop music after all this time…he’s doing it with Swedish musician and sound designer Andreas Karperyd, who is famed for a few albums of ambient-industrial music he made as Omala with Mattias Tegnér, in the later 1980s and early 1990s.

At first spin, the nine songs on Duke Of York (EDITIONS MEGO 214) might pass for some species of Cold Wave of darkish electropop, in some ways updating Wire’s guitar sound with sequencers and synths, and at the same time holding on to an evanescent vision of late-1970s and early-1980s electronic angst…and whose chumbering rhythms and mannered vocals are sure to please fans of Tuxedomoon. But there’s something stranger and almost indigestible wriggling under the surface here, which is hard to define…it may have something to do with the vocal delivery, tonelessly uttering its mysterious and allusive lyrics with the resigned air of an exiled man who has seen too much…yet there’s also an insistence to the singing that proves rather discomfiting, causing the listener to squirm in one’s chair.

What makes it odder is the chilling clarity with which each song is presented, with not a single detail fluffed, blurred or disguised under studio effects or ambient murk. Instead each synthesized note stands out with the strength of a stainless steel stamper in the printshop of the damned, ready to imprint its grim message on your forehead. One might almost be hearing a corrupted, long-lost brother of Kraftwerk…but instead of the hopeful messages of a neon-lit future where machines are doing all the work, HOX present a skewed world-view where many things have gone badly wrong, there’s a ravenous hunger in every man’s tone, and survival is tenuous at best. Whatever pleasure we may derive from the quasi-funky rhythms and upbeat tempo of a song is soon undercut by this menacing lurking shadow.

Impressive…this isn’t the first time Lewis and Karperyd have worked together, nor is it the very first Hox album (see 1999’s It-Ness). I’ve got a feeling it’s mostly the work of Lewis (he certainly provided the lyrics, and probably the singing) with Karperyd handling the production and sonic presentation. From November 2015.