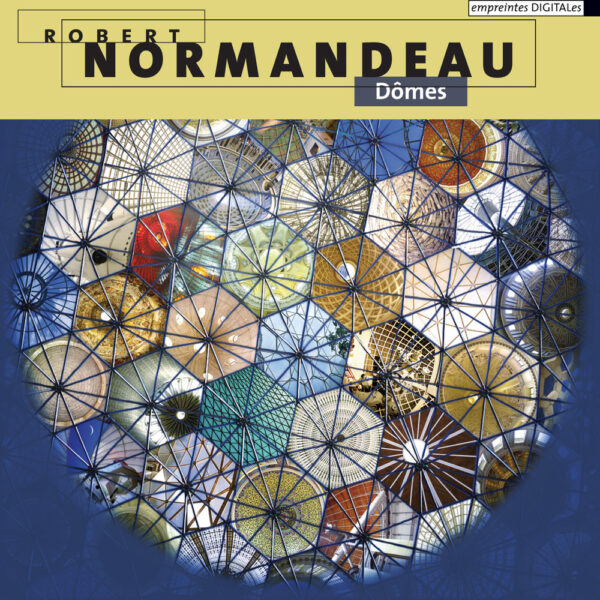 I had the idea Robert Normandeau, famed Montreal electro-acoustic composer, was a regular name in these pages, but in fact we haven’t noted a release from him since 2001’s Claire De Terre, his ambitious inter-galactic composition that drunk in the beauties of images of the earth seen from outer space. Before that there was the 1999 release Figures, with its memorable opening track ‘Le Renard Et La Rose’ composed of multiple layers of people laughing (to quite nightmarish effect) and the 19-minute ‘Venture’, which used samples from Normandeau’s prog-rock LP collection. Normandeau is a significant composer and establishment figure of many years standing, for instance he helped found the Canadian Electroacoustic Community in 1987.

His Dômes (empreintes DIGITALes IMED 14128) is a compilation / survey of five recent-ish works, not really connected with each other. ‘La Part Des Anges’ offers an ethereal and complex digital drone. It’s supposed to illustrate the way that alcohol evaporates through the walls of a barrel, or may be partially inspired by that fermentation process. In like manner, the composer tries to extract the essence of goodness from the choral material he is sampling and assembling here. Delicate, serene, unearthly in places; the listener may sip this aural brandy with some pleasure.

His ‘Kuppel’ is more earth-bound. Mundane, even. On one level, it’s an assemblage of field recordings, not unlike the sort of thing we hear in abundance from the German label Dekorder. Normandeau spent two months in Karlsruhe and recorded the trams, the church bell chiming on the Markplatz, and a squeaky door near the studio where he was working. There isn’t much radical sound-transformation going here on that I can detect, but the finished work was intended to be broadcast through the PA system of the art gallery ZKM_Kubus in Karlsruhe, thus cementing its status as a site-specific installation.

‘Pluies Noires’ from 2008 (reworked in 2014) has a darker theme. Normandeau composed incidental stage music for Sarah Kane’s play Blasted, which uses rain in the story to create dramatic pauses. Since the play contains references to the Bosnian conflict, Normandeau sees fit to ponder on “the darkness of the human soul”. Movie fans may recall the memorable lines in Taxi Driver “Some day a real rain will come and wash all the scum off the streets,” although from the dreary music on offer here it’s clear Normandeau intends something less direct and more metaphysical with these grim drones, which might be composed from brass instrument samples. A good effort to capture internal mental turmoil in sound.

‘Le Renard Et La Rose’ noted above is reprised to some degree on 2012’s ‘Baobabs’; it’s described here as an “adaptation” of that original acousmatic piece from 1995. Four lively voices, clattering percussion and tape effects combine in sprightly fashion to realise the most engaging cut on this collection. Normandeau’s use of the voice appears, again, to be strictly abstract and non-verbal, but he’s interested in a deeper level of vocal communication where “human language sound corresponds directly to the object”. Layered inside these 13 and one-half minutes is a further composition inspired by Saint-Exupery’s The Little Prince, which was commissioned by Radio Canada. This is enjoyable, if in places a rather old-school piece of composition; it could easily have been realised in the late 1960s by Berio or Ligeti.