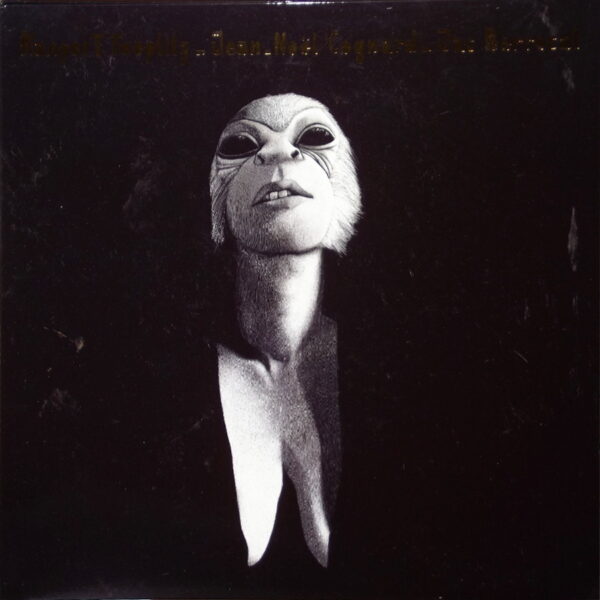 Here’s another Disques Bloc Thyristors vinyl release in a sturdy gatefold package, abiding to an all-black colour scheme with a moody and disturbing cover illustration by Mika Pusse and titles picked out in embossed gold. This all-French team-up gives us the noisy bass player Kasper T. Topelitz, the drummer Jean-Noël Cognard, and the famed trumpeter / vocalist / King of underground French jazz, Jac Berrocal. The album Disséminés Ça Et Là… (DISQUES BLOC THYRISTORS VINYLE 0190 / trAce LABEL LP 41) captures them doing it one night in 2014 at a concert at La Chapelle in Evreux. That venue is dedicated to Saint Joseph, to whom I expect many patrons were soon praying, in hopes that they would get out alive. Yes, it’s a grisly album…

Maybe the black cover has the power of suggestion, but all the music feels like it’s taking place under a pitch black sky at midnight, or on a near-dark stage with minimal lighting. A dark and grim tone abounds. The mood is set by the opening track alone, which may be just four minutes of Topelitz soloing with his bass and electronic set-up; it’s a wild puke of nasty and ugly noise. I have endured this musician in a live situation before, and I recall the nausea induced by his heavily-amplified frequencies. He’s merciless…sucking all the air out of his room with his blocky, confrontational tones.

The bulk of the album though, as demonstrated on long tracks like ‘Lune Des Grottes Profondes’ and ‘Un Oiseau D’or Aux Ailes Déployées’, shows the threesome playing together in a free-form display of hard-to-pigeonhole music, a queasy mixture of improvisation, noise, punk rock, free jazz and generally formless blathering. The trio do cohere on occasion, but there’s also a lot of negative energy swilling about the stage; you feel that the mud is rising up to their ankles. Berrocal defaults to feeding his every trumpet blast through an echoplex, so one can’t help thinking of electric Miles (Dark Magus would make a great alternative title to this album), but there’s no funk, syncopation or verve on offer from the rhythm section, mostly just evil brooding and aggressive nihilism. A lot of that scuzziness might be down to Topelitz, who has a strong taste for distortion and fuzz. Even the drummer Cognard has put aside his joyful jazz-rock fusion style of playing, and is often heard delivering angry hammer-blows for drumbeats, punishing his snares and toms brutally. I’ve never commented on how close his surname is to “cogneur”, literally “one who hits”; it seems a highly appropriate soubriquet today. 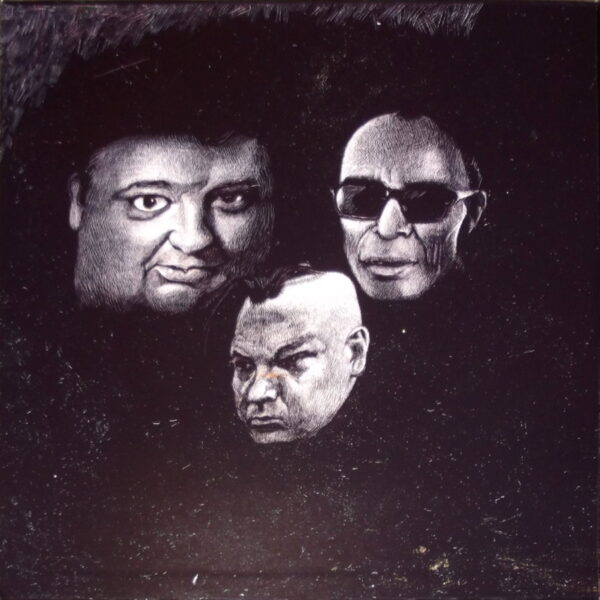 Perhaps the most telling moment here is on side two, where the trio attempt a version of the underground “hit song” ‘Rock’n Roll Station’, which Berrocal made famous with Vince Taylor under the auspices of Nurse With Wound. The original song from 1976 is strange enough, but at least those involved appeared to be having some sort of bizarre fun. Here, the live version is not only desolate and haunted, but also lacking in a steady rhythm or identifiable tune; the dial has been seriously tuned very far away from the original rock’n’ roll station. Berrocal, improvising surreal stream-of-consciousness verbals on stage, seems to be trying to rid himself of the albatross, as surely as John Lydon in PiL. Am I imagining things, or does he mumble “snuff movies” here a couple of times? A ghostly revisioning of a revenant that won’t go away…it’s reassuring that Berrocal refuses to pander to nostalgia, and is as anti-showbiz as you could wish for.

Though sprawling and slightly incoherent, there are moments of grisly punchiness and juicy nihilism that make this a worthwhile purchase…from 23 April 2015.

See here for a better idea of how the front cover is supposed to look; I’ve not been able to successfully photograph the gold embossed lettering the at the top.