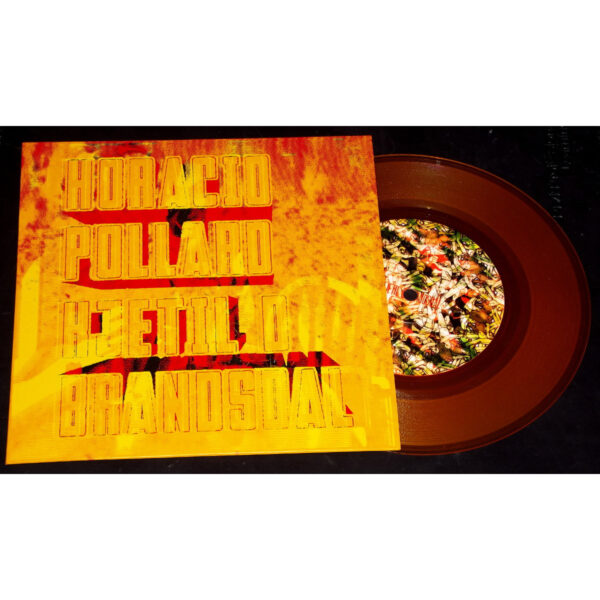 Always a pleasure to receive and hear product from Kjetil D Brandsdal in Stavanger and his Drid Machine Records label. DMR24-7 is a seven inch vinyl single pressed in orange, and a split between Kjetil and Horacio Pollard. That’s hog heaven for this writer… Kjetil’s contributions to the culture as part of Noxagt deserve their own monument, while Pollard is one of our personal favourites of eccentric, juicy noise. Pollard had a cassette released called Frequencies of Seizure (which we noted as “characterised by looping rhythms, chugging beats, and scads of grotesque noises”) and his side is an offcut from those sessions. His dumb but purposeful use of the drum machine and loop device is used as the framework for some basic vocal utterances which he moos with the assurance of a gigantic purple cow, not neglecting to muck up the surface with appropriate aural manure. “A three minute foggy funk masterpiece” is how the label describes it, where I prefer to hear a more sarcastic, grim, less showbiz-version of Suicide, with all the Elvis-isms drained away and replaced by the hideous image of the acne-riddled face of some miserable nobody. Great!

Brandsdal produces something even more stripped-down, with just two simple elements that I can discern – a lively bouncy rhythm track riff with heavy-metal grunts and roars slapped on top like so much concrete on a half-finished brick wall. Solid, heavy pop action which could have been used as a backing track by anyone from The Residents to Barnes & Barnes. Apparently it’s all realised using a bass guitar, which is a pretty groovy move – why doesn’t he attempt a whole album with a single instrument? Morten J. Olsen did the recording, and it’s also noteworthy for being Brandsdal’s first solo recording in over 16 years. Screenprinted cover for this release, with sparkly hologram elements. I don’t whether to play it or use it as a credit card. Either way, I’ll be maxed out…whatever the heck that means. Arrived 20 May 2015.