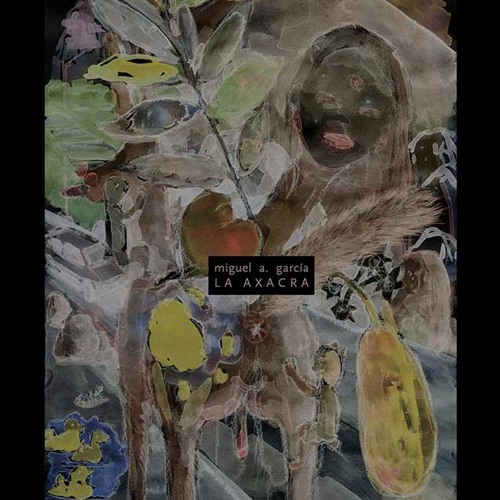 La Axacra (RMO-OPEN rmomag02) is another superb piece of subdued growling noise from Miguel A García, whose work continues to find a place in my heart, perhaps doing so by burrowing into it like some unknown breed of noise-worm which gradually but painlessly consumes human flesh, gnawing away with unforeseen results. This one is full of spectacularly understated and long-form grumblers, that grind and purr away in industrial fashion like slightly unhinged domestic fridges on the fritz, or 1930s farm machinery that’s been reassembled into the form of a miniature Godzilla, poised and ready to stomp.

I’ve often used – and overused – the word “brooding” to capture something of the surliness of this grim Spanish fellow’s music, but I can’t repent my verbal limitations on this occasion. The sense of imminent violence is never far away, but in fact the set only erupts into aggressive noise for a chunk of the very long track ‘monnon’. For the rest, it’s mostly like crawling across a wasteland of broken concrete, greasy nuts and bolts, and discarded bric-a-brac. Or being dragged across such terrain by a cart. Kjetil Hansen provides “additional sound sources”, and one track has been created with materials from the “audiolab soinu mapa” – as far as I can make out, this is a collaborative web-based project which aims to compile a sound map of the Basque country (García’s home turf).

I find the continual, non-stop nature of this noise to be very effective, conducive to better concentration, and oddly soothing despite the coarse and rough textures that underpin it. Like so much of García’s music, it’s all of a piece, has a strong and well-knit integrity at its core. Sent here October 2015, although released in 2013.