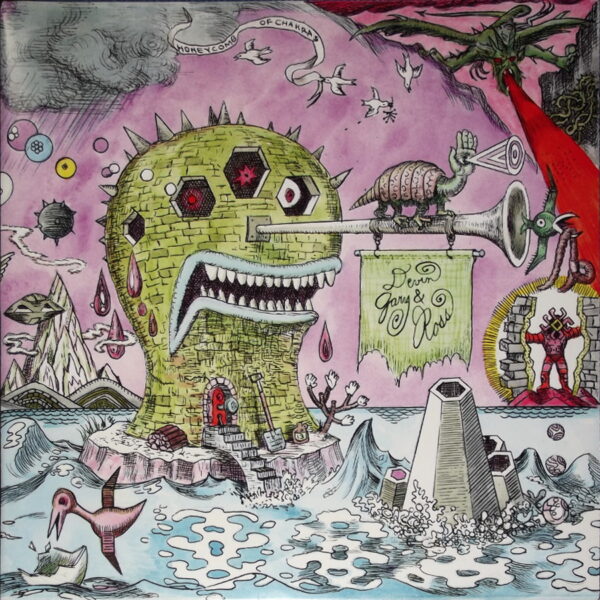 The double-LP Honeycomb of Chakras (FEEDING TUBE RECORDS FTR 134) is the result of a team-up between the cartoonists Devin Flynn and Gary Panter plus additional musician Ross Goldstein, and it’s a no-holds-barred psychedelia-inspired sprawl of songs and instrumentals. The first thing to wrap your head around is Panter’s exceptional cover art. The outer gatefold image is rendered in pale and sickly colours, and represents a nightmarish acid trip going wrong in every possible way, every surface in the imaginary landscape populated with alien movements, crazy monsters, and quasi-symbolic images and rebuses. Anyone who has read Panter’s take on Dante’s Inferno will feel at home scanning the rich array of details here. Then there’s the inner gatefold, which reminds me of one Panter strip where he describes dreaming about the ideal record shop where he finds an unheard-of psychedelic rarity with a mind-blowing sleeve. “The trick is to get that album home before you wake up”, is how I remember the caption accompanying the image he showed us. The inner image, with its wild full-strength colours and layers of collage and overprinting, indicate that his wish may have come true.

Inside we have four sides of music and song where the three musicians play anything they can lay hands on – Flynn alone has six lines of printed credits to accommodate all the instruments he has mastered, besides doing the production, engineering, and mixdown, indicating his proficiency in the studio…and the trio do indeed turn in a convincing, if slightly mannered, set of trippy performances. The record owes a considerable debt to the “rich ocean of obscure psychedelic masterpieces”, as the insert calls it – eight tracks are cover versions, or reimaginings, of great songs by American and UK bands – such as ‘Smell of Incense’ (West Coast Pop Art Experimental Band), ‘Dandelion Seeds’ (July), and ‘Farewell Aldebaran’ (Henske / Yester), whose common ground might be the strong sense of the uncanny and other-worldly which is instantly conjured – when you hear the original records, that is. Devin Gary & Ross try very hard to capture some of that essence, and they almost succeed at times, but it takes more than studied use of studio echo to replicate these acid-drenched moments. Overall, I do sense a slight inhibition and lack of conviction – neither of which is the same as a lack of musical “ability”, whatever that might mean – which renders their vision of psychedelia as somewhat hesitant, rose-tinted, and idealised. Even so, they are great songs – and their original songs aren’t half bad in this company either – and sides 1-2 are a pure delight of energy, joy, enthusiasm and near-magic.

Side three produces quite different sensations – three original instrumental workouts, segued into a single 20 minute track, comprising ‘Ebow My Mind’, ‘Quetzal’ and ‘Ghost Riders’. Here the trio showcase their penchant for applying ebow to the guitar strings, and for a bizarre production sheen that tints every sound in a haze of bucolic reverie. Slow drones result, and a smoky atmosphere of apathy descends on the listener; perfect accompaniment to staring blankly out of the window while tripping on a tab, presumably. Not exactly Electric Ladyland, that’s for sure; in fact I can’t even think of a hippie original LP from 1967 or 1968 that’s as determinedly languid as this.

It’s on side four that the band truly manage to freak out, with unhinged versions of ‘See Through Windows’ (by Family) and ‘The Other Side’ sneaked into a side-long composition that reeks of acid-induced madness. The performances are wild, much deranged laughter and manic chanting is in evidence, crazy comedy skits and silly voices abound, and a carnival mood pervades which is not unlike other riotous free-for-alls that somehow managed to be captured on vinyl in the history of this genre…such as the first Red Krayola LP, the United States of America, You Used To Think by Erica Pomerance, Rock and Other Four Letter Words, and the first Mothers of Invention LP. This is such a glorious 24 minutes that you think they could have used this collaging / layering method a bit more for the project…but then again four sides in the same vein would probably have been tiresome for the listener. This is just a perfect note to the end the LP on, dreamy and optimistic, lost in a strange reverie where reality and fantasy blend together.

Devin and Gary have worked together before on a 2008 album Go Outside, jointly released by Ecstatic Yod and the comics publisher Picture Box (who also did a slipcased art edition of Panter’s drawings and paintings). Go Outside has since been reissued by Feeding Tube Records. They have also collaborated on animated films, including one of the first web-based animation cartoons, Pink Donkey and The Fly.