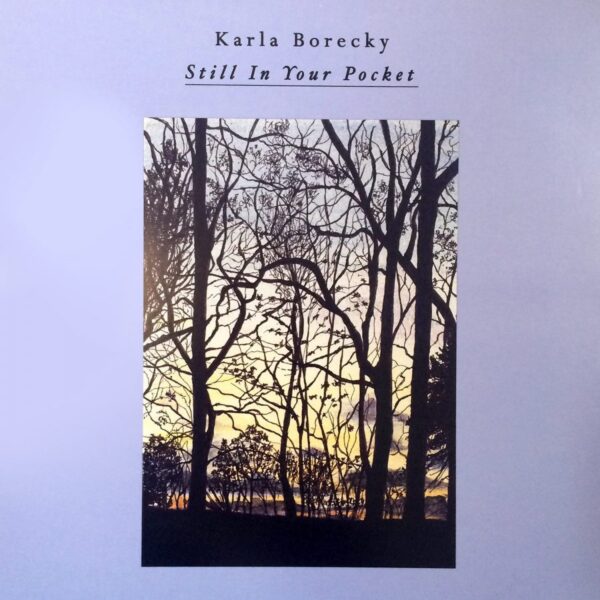 In same envelope as the IFCO album was a copy of Karla Borecky’s solo piano record, Still In Your Pocket (RECITAL NINE), released in 2014. Borecky has been honing her skills on the piano for some years now, and it’s excellent that she’s been given this showcase for her music. It’s in marked contrast to the IFCO album; for Lost At Sea, the piano is just one part of the overall composition, and the piano figures have been compressed and forced into a particular form. On Still In Your Pocket, the musician is able to stretch out a little more, but every piece remains a model of clarity and simplicity. You could divide the album into its two sides (and LPs used to be programmed this way, back in the good old days); five shorter “narrative” tunes are on side one, the two long “abstract and modernist” pieces are on side two. The A side reminded one reviewer of Chopin nocturnes; me, I think of Erik Satie, only a far less playful Satie, not a man amused by umbrellas and tea parties and parlour games, but one who finds himself transported against his will from early 20th century Europe into the desolation of a modern American shopping mall, and doesn’t know where to turn in his confused and cresftallen state. Titles here indicate we could read the tunes as short stories (‘Suspense in the Library’), as landscape paintings (‘The Passing of Clouds’) as mood pieces, (‘The Sadness of Things’), or all three. If I recall, Karla has also done a painting called ‘The Sadness of Things’. To a prog fan like myself, this could be the acoustic update on ELP’s Pictures At An Exhibition. Unlike ELP, compression and brevity, along with invention and melody, are the watchwords here.

On the B side, we have the excellent ‘Structure’ and the title track, both quite lengthy and as above highly reminiscent of Morton Feldman and John Cage – only there is far more heart and emotion in one minute of Borecky’s music than John Cage managed in a lifetime of arid composition. As to structure, it’s as though she’s imitating a Feldman-like approach to creating patterns, only doing so by pure intuition rather than through compositional methods; although I’m not sure if the pieces are written, spontaneous, or represent some halfway-house approach. If I am right about the intuition, she may share some common ground with Ashley Paul, who has listened to so much Feldman it’s practically in her bones, and aims to feed the inspiration directly into her spontaneous guitar music. While I enjoy the up-tempo and semi-narrative A side, the spare B-side is just perfect in its austerity, and is a totally mesmerising 20 minutes which enables the listener to enter a very still and serene zone, which you will be reluctant to depart from. In all, a very genuine and heartfelt, crafted work of art.