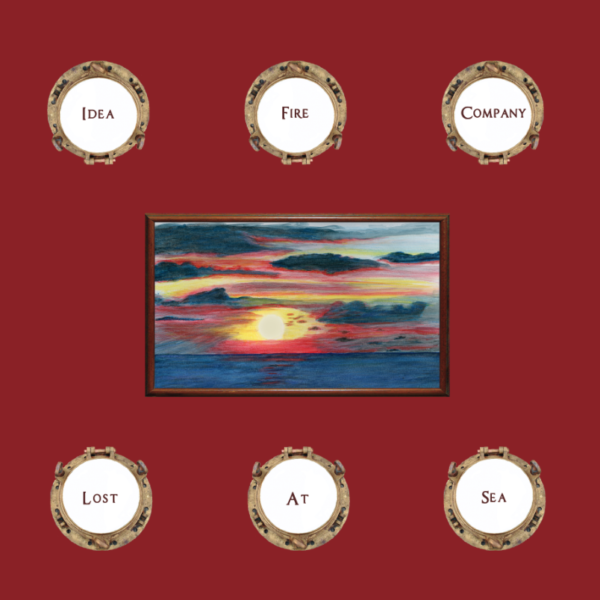 Last heard from Idea Fire Company with their 2013 offering, Postcards; from November 2015, we have their new long-player Lost At Sea (RECITAL THIRTEEN). The title is another in the ongoing series of sea-faring or maritime titles which Scott Foust uses as a metaphor, either for the decline of monopoly capitalism (he probably regards it as a sinking ship) or for his own avant-garde project, which he often seems to admit is floundering or adrift. The maritime metaphors continue with track titles such as ‘The Horse Latitudes’, which is unlikely to be a tribute to Jim Morrison and The Doors (it certainly isn’t a cover version). IFCO currently remain the duo of Scott Foust and Karla Borecky, which is how the band began life, after some brief experiments around 2005 to expand the band roster and engaging Jessi Leigh Swenson and Meara O’Reilly as guest keyboard players. Another change is the shift away from Foust’s own label, Swill Radio; this item is released on Scott McCann’s Recital label, a change which may reflect how extremely difficult it is to self-finance a vinyl pressing (and distribution of same) these days.

IFCO have also gradually shifted their ground into becoming, on this LP at least, an almost all-acoustic proposition; where their earliest work was all-synthesised electronic music, creating a hermetically sealed world of mesmerising repetitions and drones, Lost At Sea is realised mostly on piano and trumpet. Well, almost mostly. Foust adds radio wave samples and noise to two tracks (both versions of the title track); voices are faintly audible, again reinforcing the idea of “lostness” and distance; and we do hear the synth, for some 13 minutes on ‘The Horse Latitudes’, where he contributes a pained, keening note of abstract electric whine alongside Borecky’s endlessly-repeated forlorn piano arpeggio. What hasn’t changed is the hard-faced commitment to stark simplicity; one hesitates to use the word “minimalism”, since everyone and his brother in music pretends to be a “minimalist” these days, whether through their pared-down processed sounds emanating from laptops, or by name-checking composers like La Monte Young and Terry Riley in their interviews. IFCO’s music is still firmly committed to exploring a single idea one step at a time, and doing so slowly and methodically; it thus remains a challenging listen, and the ice-cold temperatures on offer here really do convey the sense of a ship lost among the icebergs. Considering that most musicians have traditionally found it easier to get to this freezing zone through use of cold, alien synths, it’s perhaps impressive – and original – that Foust and Borecky can now get there by mostly-acoustic means, and through such a spartan sound. The temptation to flesh out the sound, or to increase the tempo, is never once yielded to.

There’s also Foust’s – erm – “untutored” trumpet playing on ‘Red Sky’ and ‘Lost At Sea I’, which (along with his trombone work) has long been a stumbling block for this listener. Admittedly, his technique is slowly improving somewhat. I’d imagine we are not supposed to hear his errant puffs as anything resembling “jazz” or “improvised music” (Foust regards the latter genre as The Enemy, for his own reasons), and with that in mind it’s likely the trumpet is, to him, a sound-generating unit whose outputs are to be moulded and carved to his own purposes, much as he used to do with his beloved Korg synths. In both cases, he’s playing on top of a Borecky piano figure – a very short phrase repeated over and over, in the manner perhaps of a John Cage-inspired experiment. With certain synth models, I suppose it would have been possible to programme and sequence such patterns; to her credit, Borecky plays them manually, as demanding as it must be for her to complete the task. ‘Distant Voices Singing’ appears to be a short solo spot for her romantic piano, and might almost be an out-take from Still In Your Pocket (see next review).

Intellectually and stylistically then there is much to admire on this record, but I can’t say it’s an uplifting spin. Lost At Sea feels like a cold and defeated work, informed by the same deep sadness which seems to have smitten this pair of players since 2008’s The Island Of Good Taste onwards. For a further description of the narrative metaphor used for this album, where the duo imagine themselves to be “the bar band on a small cruise ship”, see the label website.