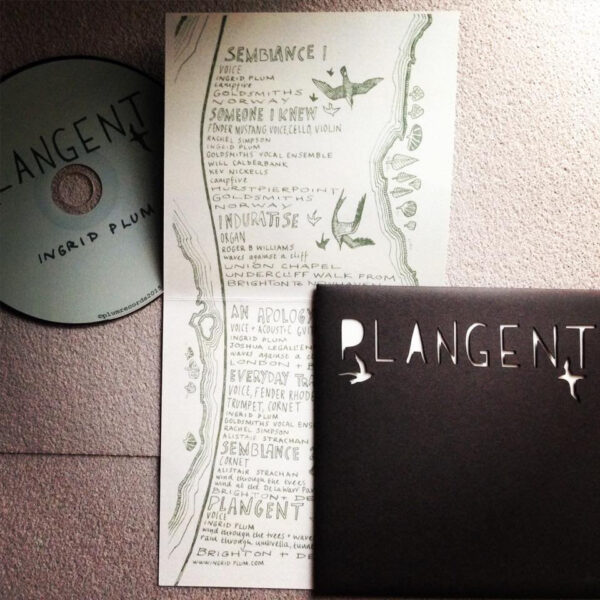 Received a copy of Plangent (PLUM RECORDS) by English performer Ingrid Plum in September 2015…this is an unusual blend of field recordings (used somewhat like sound effects in a radio play – thunderstorm, fireside, ocean), folk-ish songs, and vague ambient droning…the album shifts viewpoints around this mysterious scene quite obliquely, like a wandering movie camera, and does indeed manage to cast an engaging spell on the audience. While the song and music parts disappoint me somewhat on the singing front, it should be stressed that she’s not making a song album like Janis Ian or Joni Mitchell, and her work is striving towards a form of mixed-media statement, blending improvised music, sound art, video, image, and performance. If Plangent feels slightly incomplete on first listen, perhaps it’s up to us to add something to the equation to bring the statement to fruition. The lyrics may be a tad too introspective for this listener, but in her favour, the musical arrangements are just fine, acoustic and minimal in nature, adding a suitably haunting backdrop for the meandering melodies. The overall vibe is extremely gentle and wispy. Her aim with this release is to effect a combination of “neo-classical music with contemporary Nordic folk music,” according to her press. Certainly one of the more fey releases to have come our way lately, but Ingrid Plum creates a convincing world on her own terms, and there is conviction in her work. Originally from Copenhagen, she is currently based in Brighton, and I notice she helped out at the Brighton Alternative Jazz Festival.