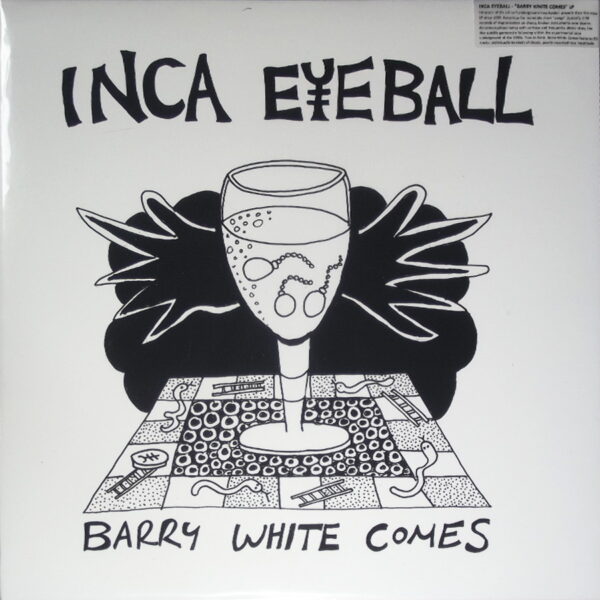 Inca Eyeball was one of many Phil Todd “projects”, and though we used to receive many fascinating items from Todd’s label Betley Welcomes Careful Drivers in the 1990s, I don’t think he ever sent us any of the cassettes and occasional vinyls produced by this very English and very Northern duo. The other half of the duo was Joincey, whose contributions did cross our path in the “good old days” of The Sound Projector, on records by Green Monkey and Anna Planeta; if those CDRs still work, I really must revisit them. Joincey, sometimes called Wagstaff, has no end of other aliases, has played in Stuckometer and A Band and many other combos, and ran his own cassette label from Stoke-On-Trent for a time.

I always admired Todd’s music (and still enjoy his current wild and woolly take on psychedelia, for which he’s at last getting some recognition in the mainstream) and his attitude; he was keeping alive the spirit of small press labels and underground publishing in the 1990s, along with the Fisheye label, and others…but the landscape has changed now. I am surprised to learn that Inca Eyeball are still some sort of living entity, as it seemed so much a product of the 1990s, but Barry White Comes (SPLEEN COFFIN SP-41-LP) appears to be a recent-ish product; according to one website they will admit they are still active as of 2011, and this LP may have been recorded in 2014 or even more recently. It’s completely nuts…Inca Eyeball perform here as Stillborn Unicorn and Mister Jemmy, the sleeve is covered with unhelpful and misleading hand-written notes, and you get the impression that you’re being snickered at mercilessly if you take any of this (or anything in life) seriously.

On two suites, called “Sheep Spray” and “Posthumous Thoughts Of Hats”, the duo stumble their way through 83 pieces and turn in a very engaging take using the lo-fi home recording “method”, emerging as a form of surrealist cabaret act rather than a post-punk combo…the album was recorded on a cassette deck and the band pay no attention to sissy nonsense like microphone placement, overdubs, effects, or recording quality, instead capturing raw spontaneous absurdity as it pours incessantly out of their heads, necks, and torsos. Everything is a very short song working to pre-written lyrics, but the music is always improvised on the spot, and the Incas pick up any instrument or noise-maker that comes to hand to deliver themselves of these half-digested non-ideas.

From all this unpromising chaos, it would be nice to report that some sort of rough poetry emerges, but it doesn’t; Barry White Comes is what it is, and there’s no interest in creating “art” music. Unless you regard the task of creating a song that lasts less than ten seconds to be something of a discipline; in which case the Incas are past masters of the form. But there is honesty in the music, and the lyrics feature a lot of ranting, and a sense of frustration, a seething grind that threatens to turn into violence any time; it would have been great to have this material around in the 1980s, as an expression of the deep boredom and disaffection felt by many during that time of mass unemployment. It’s great. I’m just a little puzzled to find it on the Spleen Coffin label, an excellent American label I associate with avant-garde Techno music by Opéra Mort and Decapitated Hed. But then Inca Eyeball did manage to get a release on Fusetron back in the day. From 19 October 2015.