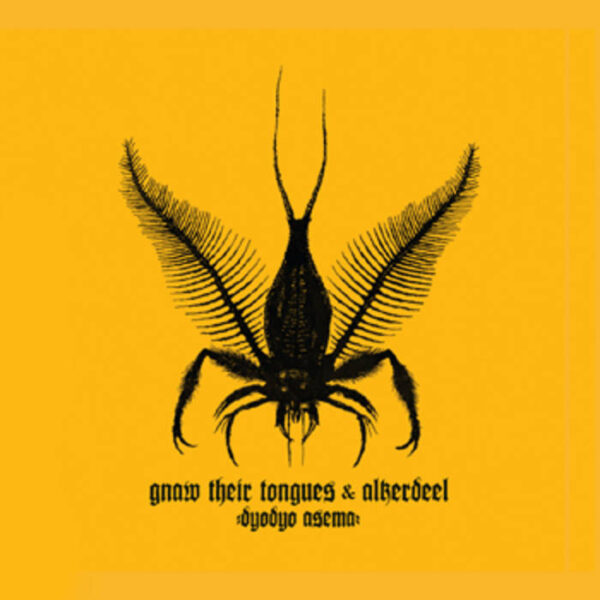 Those of us familiar with the lumbering sludge BM of Belgian band Alkerdeel and Dutch solo BM act Gnaw Their Tongues’ hysterical noise black ambient fusion would surely be aghast to know that back in 2013 / 2014 these two briefly became partners in crime and released this mini-album together with an accompanying music video to celebrate the 5th anniversary of the ConSouling Sounds label. The video and the music are best watched and heard together for the full terrifying experience but for those already quailing at the mere thought of this Belgian-Dutch merger, I’ll limit my review to the music soundtrack.

The collaboration gets off to a good (bad?) start with a frightening nature-recording scenario (real or not, doesn’t matter) suggesting flies and other insects gathering around a dead body and laying their eggs in it. Guitar and bass guitar begin together but it’s the bass that establishes the musical foundation with deep sinister drone shudder and rumble. Frying sound effects flit about, leaving unwelcome slime and residue behind. Sonic booms soon roar out across a blackened landscape and thin eerie, grinding voices growl and cry out, like alien larvae crawling out of eggs laid in rotting meat and discovering that they’re all on their own and must fight one another if any are to survive. The music is generally low-key and concentrates on slowly building up an immersive soundscape filled with hidden monstrous terrors and nightmares. The pace suddenly quickens after the 7th minute with an actual desperate melody in the background, percussion starts up and the voices very quickly hit a level close to gibbering hysteria. At this point the music is filled with panic and urgency.

At about the halfway point the music reaches a level where it passes into a world of seething potential horror which quickly turns into a scene of devastation and destruction. This lasts some time before a fairly lengthy denouement of the most abject despair and hopelessness arrives and gradually brings listeners back to the real world. The horror never completely disappears and lingers long after the music fades away.

The two bands do go well together: Alkerdeel provide the bass structure for Gnaw Their Tongues’ sinister noise and buzz effects, and both acts bounce off each other with droning sludge, a cavernous atmosphere, high-pitched tones and goblin voices all conjuring up soundscapes of extreme terror and dread. The climax is not nearly as over-the-top explosive or chaotic as I expected, given that GTT is a past master of such debauchery, and the voices are too far back in the mix to fully convey the horror of suffering and dying without hope or redemption. In the track’s closing moments, I sense some feeling of pity for individual lives that are brief, filled with pain and agony, and which pass without much meaning, purpose or hope other than to eat and be eaten, and to propagate the species whose purpose as a whole might be as meaningless as the lives of the individuals that constitute its population.

Overall the track is very powerful in its total immersion and intensity, and in what it hints at rather than exposes. The first half especially is a slow-burning deep build-up and though the second half is good, it doesn’t quite match its partner in intensity and horror. Perhaps the concept needs more playing time to develop more fully and realise its full adult beauty and glory, if those can be considered the right words.

The video to “Dyodyo Asema” has been posted to Youtube by Alkerdeel : by turns it’s fascinating and gut-wrenching to watch, featuring filmed close-ups of hatching mosquito larvae, adult mosquitoes, moving blood cells and an abstract section of mosquito parts forming exquisite and graceful geometric patterns. Viewers can make up their own minds about how the various sections of the video form a narrative. The video is intended as a homage to Elias Merhige’s cult film “Begotten” which is about the cycle of life, death and rebirth and which itself requires a strong stomach to watch.