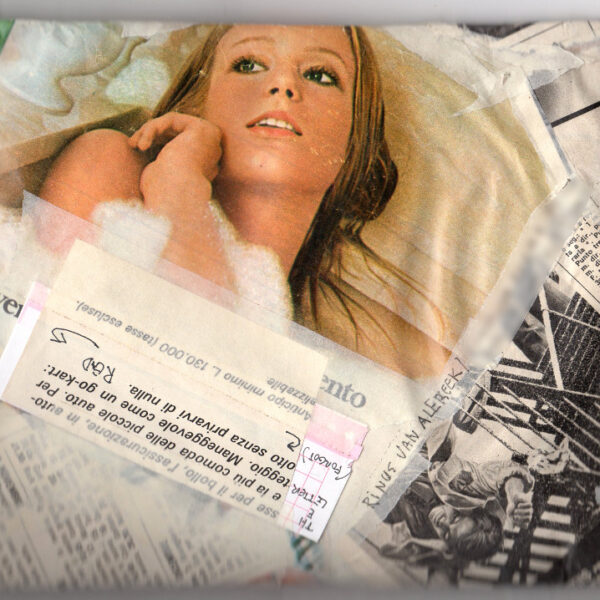 All Gold is by Jeff Surak, the musician from Washington DC, some of whose many fine endeavours we have been fortunate enough to note in the past. It turns out he’s an old friend of Rinus van Alebeek, who runs Staaltape. All of these Staaltape editions exist as hand-made, very limited, works of art, but he went an extra mile for All Gold. I think there were ten copies in the first edition, each with unique collage booklets. What Rinus does with his scalpel and rolls of masking tape indicates a tremendous amount of care, imagination, and craft.

It seems I have leaned my foot pedal too heavily on the “dark” tag when describing Surak’s previous work. “This one not dark…” Rinus assures me in the enclosed letter, “but the sonification of bliss & burning horizons.” On the website he makes it clear that Surak would be more than capable of writing the Great American Novel, only doing so in sound. I have always liked the idea that information can be expressed and captured in sound, and read and understood by the listener as surely as reading a book. Perhaps it’s a nebulous concept though, and I doubt we’ll ever all agree on what it means, or how to translate such a transaction into practical terms.

All Gold comprises nine pieces on a C40 cassette. So far everything I hear is characterised by a certain maximalism, Surak saturating the tape surface with a large amount of detail and content. If this is pages from a novel, then he wore out eight ribbons on the typewriter (yes, I can’t imagine him doing it on a word-processor) and the lines are single-spaced across 30 reams of Remington’s finest. The nine pieces might be said to work like chapters, episodic parts of a series, days in the life from a diary…but the listener must provide some imaginative input of their own, the story is non-linear, and every listener will have their own different version of it. Dense mixtures of field recordings, from semi-identifiable sources; rich, sunlit drones packed with texture; delicate, moving musical miniatures; confusing juxtapositions of unrelated materials. Somehow everything about this tape is a perfect match for this label’s underlying aesthetic – mysterious, understated, ambiguous. And beautiful.

If van Alebeek is the publishing house for this novel, he’s a publisher in the way that book and magazine publishers used to be once upon a time, i.e. they had integrity. They believed in the power of the printed word to communicate ideas. They published books and articles they believed in and thought others should read and personally wanted to be associated with, not books that tie in with corporate marketing deals and feature empty faces of celebrities on the covers, crowding out the shelves and the bookshops with unnecessary clutter.

The second item is by Slow Slow Loris, the duo of Angela Nina Yeowell and Robert Heim from Berlin. From Monster Till Mourning… is an uneasy mix of strange and dramatic vocalising effects from Angela, and electronic noise-bursts and synthesized, heavily reverbed blasts from Robert. Angela has appeared on Berlin Tape Run 2 from Rinus’ label in 2011, and on a survey of Berlin avant-garde music published by Audition Records. Robert Heim may have been one half of Oko, who made an ambient noise tape for Land Of Decay in 2013.

The duo certainly have a lot of conviction and passion, but the music of Slow Slow Loris is a little out of my line…it strikes me as being a hop skip and a jump away from Goth (albeit a heavily abstracted take on the genre), shrill and hysterical in tone, with a lot of unnecessary posturing in both the electronic noise and the voice, which is enriched with every possible studio effect set to stun. The Goth vibe is also transmitted by half the images in the enclosed booklet – black eyeshadow, black fingernails, black lipstick, anti-fashion magazine images which teeter close to cliché. “To me it sounds like the comeback of someone we liked in the 80s, but since then forgot about,” says Rinus in his attached letter. I’d agree with the 1980s part of that sentiment. It reminds me of a grotesque version of Mark Almond meeting up with Lydia Lunch, and they both tripped over a box of broken synths before meeting up with Merzbow and Knurl at the Suicide reunion gig near the Bowery.

However, in its favour, there’s an underlying chaos and howl to this material which may appeal to some. You can almost imagine it as a stage-show, with strobe lighting, projected images, and black PVC outfits…a sort of alienating performance art event that passes on vague feelings of impending doom. To bolster this claim, be sure to check out the video clips on their website.