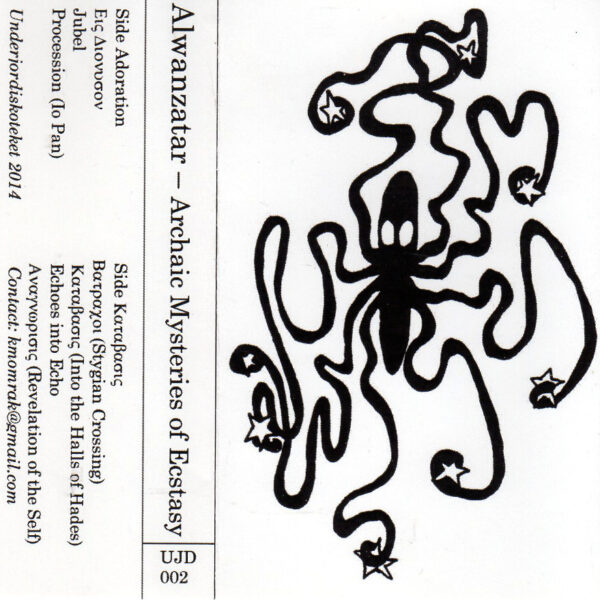 Far-out ceremonial chantings and music by Alwanzatar on his cassette tape Archaic Mysteries Of Ecstasy (UNDERJORDISKOTEKET UJD 002). He recites portentous utterances into a reverberating echo chamber, his words inspired by “ancient Greek hymns and invocations”, while providing his own musical framework with a cornucopia of analogue synths, a Theremin, a Stylophone, and various cosmic flutes and reedy pipes borrowed from local demigod Pan. In so doing, he hopes to “invoke the gods of ecstatic divination and intoxicated revelry”. The end result may be excessively overloaded with musical information (lots of layers, lots of echo), but the vocal performances are convincing – Alwanzatar really throws himself into his task, working himself into a ritual lather through his esoteric incantations. The listening experience does indeed suggest a view of the ancient world as warped by the glaucoma-infected eyes of one devoted to Bacchus – tilted, extreme, hyper-dense and packed with strange swarming activity. If ever there was music destined to be the soundtrack for the Cult of Cthulu, this is it. Lest you doubt Alwanzatar’s commitment to his craft, his stage performances seem to involve him adopting the cowl in the manner of Sunn O))); I’ll leave the rest to your imagination. Alwanzatar is Kristoffer Momrak, who also calls himself Krizla, under which name he has sung for the folk-rock group Tusmørke and added his electronic sounds to the post-Gong outer-space cadets, Spectral Haze – both bands from Oslo, whence this cassette was sent. Momrak also included a printed essay accompanying the music, presented as a 36pp booklet with scholarly references; should you wish to become enlightened about The Eleusinian Mysteries, your course of action is clear. From 12 March 2015.