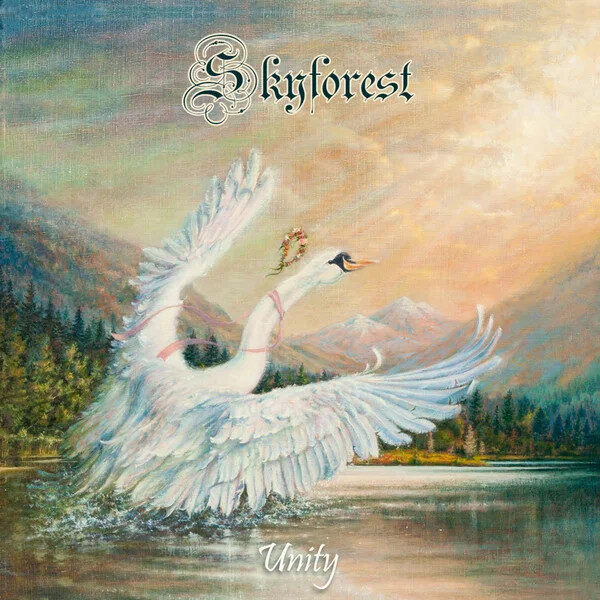 Skyforest is a fairly recent one-man black metal act from Russia (Moscow region) and “Unity” is its second album. It has quite a variety of music, much of which I’ll admit isn’t to my taste at all and which smacks of stereotypes of a very kitschy pop kind. There’s a heavy reliance on syrupy rousing melodies and synthesisers to supply the orchestral music bearing those tunes. However when B.M. brings in BM and post-BM elements and structures, the music positively throbs with power and exuberance, and those aspects compensate for the saccharine and the sugar. Vocals reflect the project’s split personality as well, with some songs featuring raspy voices so raw they could strip the proverbial paint off walls and other tracks emphasising flat and faceless pure-toned singing that would not be out of place on the recent 2016 Eurovision, now that the contest has become as bland as Pop Idol.

Those tracks I find more bearable than others include “Autumnal Embrace” which would be even more tolerable if it could lose the fake violin and other background orchestral touches and maybe replace them with strumming balalaika for a stronger neo-folk feel; and “Fading Glow” which is a little like a continuation of “Autumnal Embrace” in its martial thudding percussion. Those of us who can’t stand the syrup are best advised to avoid “The Swan” which ladles out the faux symphonic music and the bland singing by the bucket-loads.

Now I’m not against the kind of fusion BM that Skyforest want to create but I’d advise B.M. to lay off the synthesised orchestras and bring in some real violinists or an actual chamber music group to embellish his music, and to hire someone with some professional opera-singing training or experience so that Skyforest can deliver music with real emotion and heartache, and a sharp or tough edge to boot. “Unity” just doesn’t sound as sincere as it could and the music deserves much better.