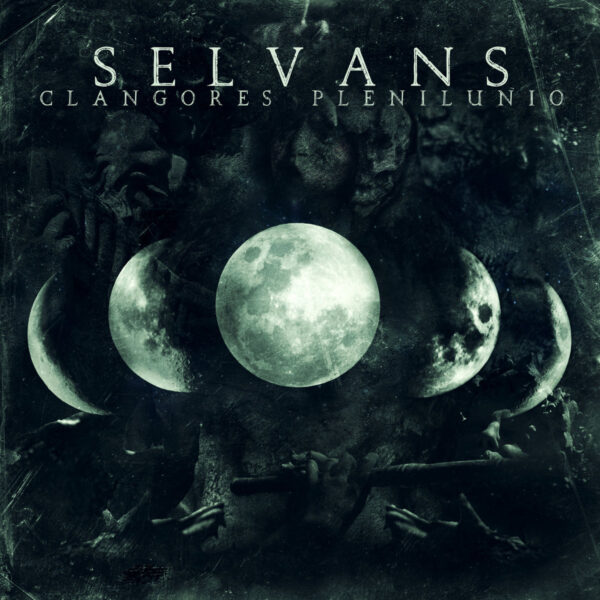 Just when I think I must have heard every possible combination of black metal with a style of folk music from particular countries, be it Kentucky bluegrass or Ukrainian hopak or even BM psychedelia with Aztec and Mayan folk elements … along comes this Italian group boasting a fusion of BM with tarantella from southern Italy. It took a while for me to digest this possibility … I usually think of tarantella (if ever I think of it at all, meaning “never” of course) as cheery, bouncy music with happy dancing, the original meaning and functions of tarantella having long been obscured over centuries … but hearing Selvans’ EP “Clangores Plenilunio” convinced me that southern Italian folk and BM can and do co-exist, at least for 30 minutes before the novelty value wears off.

The trick is to keep the dominant BM style minimal and straightforward, stressing the blast-beat percussion, the rasping vocals and the charging battery of guitars, and use the folk music as an extra layer behind the music. On most tracks, the folk element is limited to fluttery melodies on flutes and pipes, though in a couple of songs this extends to folk melodies and rhythms played on accordion (or synthesised accordion as it may be). This usually means that the quality of sound has to be clear so that all instruments can be heard distinctly, and this is what we have on the EP.

The Selvans musicians play an aggressive and melodic style of BM, very technically consistent and featuring crunchy power where it’s needed. The synthesised drumming could be a lot stronger than it is as its sound is thin and at best whippy and bouncy rather than thunderous. Guitars are very strong and rough-edged, and are at their best and most enthusiastic in sections where they fly away on folk-influenced tunes and riffs. Selvans also use synthesisers for an additional layer of orchestral string music and this is the least satisfying part of their style.

Best songs are those where the folk music elements embellish the songs with the instrumental music gaining a distinctive and memorable flavour. Solo flute playing along with acoustic guitar and some percussion sometimes reminds me a little of Japanese folk instrumental music, perhaps because of the intensely dark atmosphere behind it. At this point I cease to care about whether I’m hearing tarantella BM or not as the music transcends its origins and becomes something else entirely, it’s that good. If the guys could drop their dependence on synthesisers and rely on real drums and live folk acoustic instruments, I’d be happier again. As it is, this is a good recording of melodic BM with very catchy folk music rhythms.