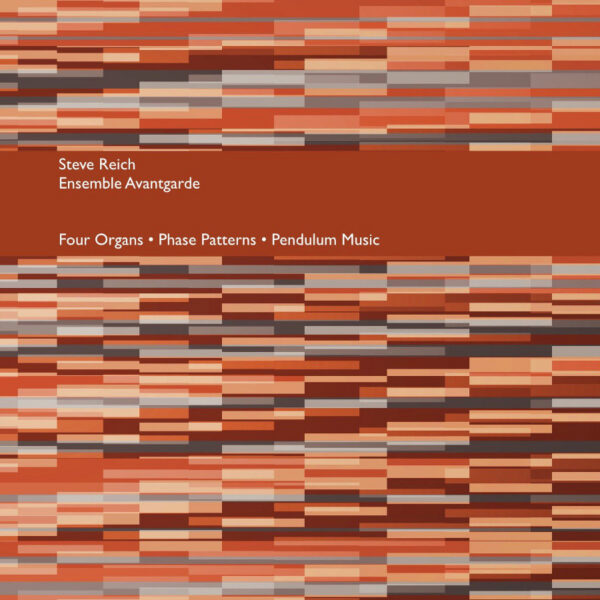 Recently noted Karl Records and their occasional forays into documenting 20th-century avant-garde music. I see they call this their “Parnassus Series”, which seems to me a tad unfortunate; American Minimalist Steve Reich is undoubtedly a pioneer, but claiming immortality and super-powers for the man may be a shade optimistic. On today’s item Four Organs / Phase Patterns / Pendulum Music (KR026), we’ve got interpretations of four of his early works from 1968 and 1970 for percussion, piano and organs, played by Ensemble Avantgarde. This German group were formed in Leipzig in 1989, and have produced many well-respected recordings of Cage, Feldman, Berio, and others, and been published by excellent labels such as Wergo, Hat Art, and Darbinghaus & Grimm. Matter of fact they’ve “done” Reich before in 1999, playing these exact same pieces; since that was for a CD release, I suppose the label hyperbole about “available on vinyl for the first time ever!” is accurate. I have a lot of time for Reich’s early music, but for some reason these performances don’t do a lot for me. Ensemble Avantgarde’s playing is probably very accurate, but it feels kind of clinical, even lifeless. For now I’ll stick with my 1974 copy of Deutsche Grammophon DG 2535-463, which is full of the sprightliness and clean lines I associate with the compositions of this most approachable of minimalists, and which often sends me into the expected trance-like state through its benign repetitions, a sensation which I’m not experiencing on today’s play. Maybe having Steve Reich in the room makes a difference; my favourite recordings are those on which he is supervising the production, or even playing an instrument himself. From 17th March 2016.