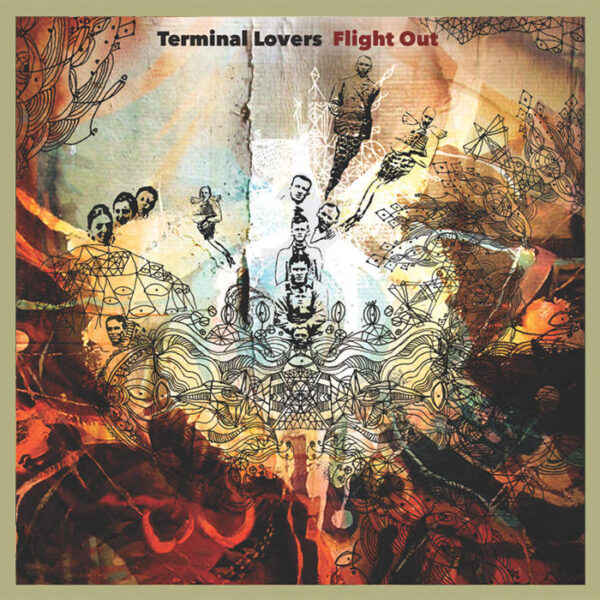 Very welcome return of Terminal Lovers, whose LP As Eyes Burn Clean (for Public Guilt records) we noted in 2009; the “good old days”, since we used to love receiving eccentric noise and rock music from the label Public Guilt, but they seem to have run out of steam in 2011. Terminal Lovers are from Cleveland, and are led by the very active Dave Cintron, a guitarist and singer who has been a member of our other favourite Cleveland band Scarcity Of Tanks, whose back catalogue we recommend heartily. Cintron has also toured with “the” Cleveland band of all time, Pere Ubu, in 2013. He’s joined here by some very talented sidemen recruited from members of Keelhaul, Inmates, Blind Spring, Boulder, Destructor, Midnight, Darvocets, and Cider. If you find the “mathrock” (whatever became of that genre?) of bands like Keelhaul too exhausting, you’ll probably get on better with Terminal Lovers – they’re full of energy and verve, but not overloaded to the point of insanity. While we can detect elements of Nirvana-like grunge in their amplified guitars, there’s also some incredible delicacy in the harmonised vocals and the singing, which I can only recommend to fans of psychedelic music; this is a credible update on powerful psych records by Mad River, Kak, SRC, or even 13th Floor Elevators. Terminal Lovers have the drive to push things into the far-out realms when called upon, but ‘The Lamp’ (co-written with Depew) is a gorgeous doomed melodic hymn of incense and faded splendour worthy of Ultimate Spinach. The band also do the “meandering jam of lostness into the cosmos” thing quite well on ‘Meaning Over’, where we are pulled towards dark matter and black holes for some 9 minutes of spacey grooviness. Most of the album though is hard-rocking material full of twists, alienation, and eerie menace. Excellent. From 23 June 2015.