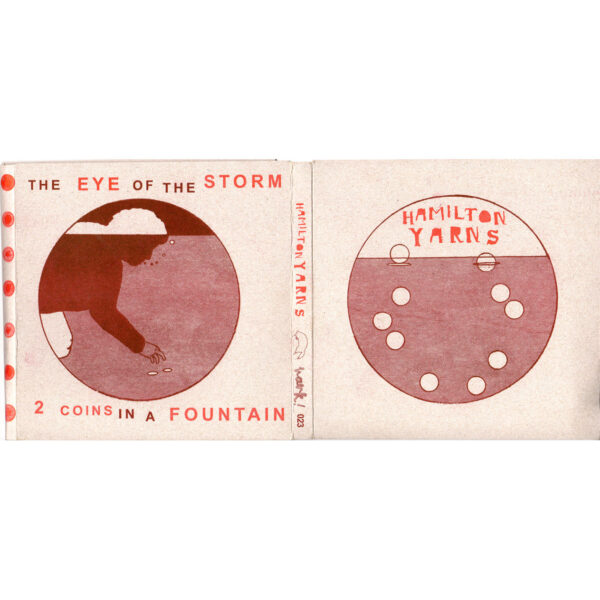 Following on from 2014’s The Orchard, English combo Hamilton Yarns continue their preoccupation with oblique story-telling on their new release, which is two short-ish releases at 25 mins apiece, yoked together in a hand-screenprinted gatefold card cover. 2 Coins In A Fountain / The Eye Of The Storm (HARKIT HARK!023) is intended as an episodic journey, each song representing glimpsed highlights of pastoral beauty, strangeness and charm along the trail. To this end, the music is enhanced with field recordings and sound effects reminiscent of the English countryside. On 2 Coins, many of the songs are typically ramshackle and low-key undemonstrative pop music, almost the polar opposite of an R’n’B diva giving it hell for leather through a pair of cracked lungs; the voices of Iain Paxon, Alistair Strachan, Daisey Wakefield and Josephine Dimbleby sound more like they’re welcoming you into their front parlour for a slice of Dundee cake. The closing tracks ‘Drifting I’ and ‘Drifting II’ are the high spots of this first half; combining all their interests in Eno-influenced ambient music, home-made kosmische drone, and friendly Childrens’ TV music from the 1970s in a wholly unselfconcsious manner. The artworks for 2 Coins confirm that it’s the “daytime” half of the act, while Eye of the Storm is the nocturne. Here the music is less oriented in the direction of conventional pop songs and tends towards atmospheric mood music, even more washed-out drones, eccentric and highly treated studio effects, and a general tone of introverted contemplation. Field recordings from Lewes, Brighton and Sussex enhance the dreamy sensations. ‘Be The One’ and ‘Across The Sky’ are two high spots here, where the combo exhibit incredible restraint in both composition and performance, and what emerges is a bare-bones construct of pop music, its languid melody and understated chords barely hanging together. In like manner, the artworks are all like deconstructed snapshots from a forgotten children’s book of the 1960s, taken out of context; proposing links between country walks and diagrammatic views of the cosmos. A fully integrated release in terms of its content, packaging, and delivery; recommended. From 12 August 2015.