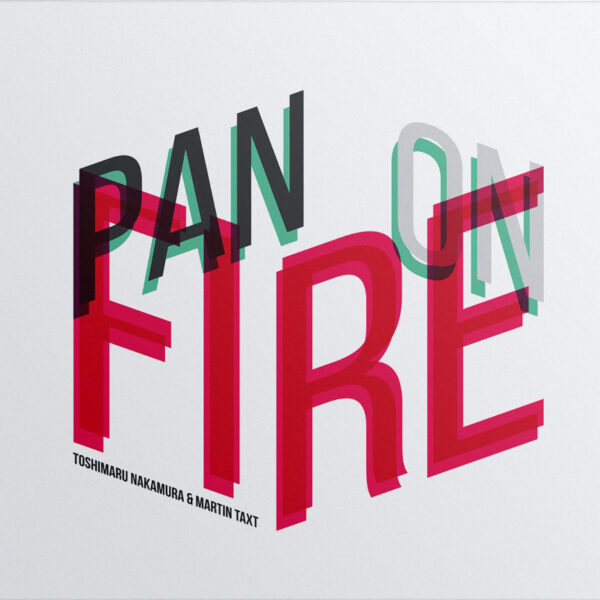 Ever since Elvis, Bill Haley, Jerry Lee Lewis and many others enjoined their partner to “make some noise with the pots and pans”, all of rock music has strived to find the hidden connections between music, sex, and cookery. Avant-garde music has also picked up on these universal themes, albeit in a sporadic fashion. One recent example is Pan On Fire (MONOTYPE RECORDS MONO 098), a meaty set of improvised noise duets by Toshimaru Nakamura, the Japanese warlord of controlled feedback, and Martin Taxt, the Norwegian tuba player. The resulting mess may surpass Cordon Bleu standards, or be completely inedible. Gordon Ramsay has publicly disowned any connection with this record.

It’s great to see Toshi getting stuck in to some juicy, blocky noise lately…we very much enjoyed his foray into the forbidden zone of avant-rock stoner noise when he collaborated with the American underground band Many Arms in 2013. Martin Taxt may be known to some listeners through his previous releases on Sofa, including the album Selektiv Hogst on which Toshi also appeared, along with the Japanese guitarist Tetuzi Akiyama. Impressively, his tuba is both “microtonal” and heavily amplified, and you can imagine what mighty blasts result from such a setup. True to form, Pan On Fire is anything but minimal, but is a loud and busy record with no space left unfilled by scorching blasts of completely abstract racket powered and fuelled by 115 volts of Edison’s finest juice.

The title Pan On Fire might be a play on the well-known movie Man on Fire, and while I’ve never seen the 2004 version with Denzel Washington or the 1987 French-Italian coproduction on which it was based, my inclinations run to the movie of this same name (if indeed there was one) to which Irmin Schmidt provided the soundtrack in the early 1980s (see Filmmusik Vol.2, SPOON 013). However, Nakamura and Taxt are in fact making a series of witty jokes on the theme of cookery, with their track titles which refer to many implements and utensils found in this domestic situation. I’d like to think the album paints a picture of minor disasters and spillages in the kitchen…quite often their crackly low-register growls do resemble the sound of a deep fryer performing its lethal tasks, and much of the music behaves like a microscopic view of bubbling oil, telling us more than we want to know about the detail of chemical processes involved in food preparation. What emerges is the strong notion that cookery is a potentially dangerous and life-threatening activity. You’ll be lucky to make it out of the kitchen with all your fingers still attached.

For other food-related noise records, we might also want to mention the Sonic Catering Band at this point, or at the very least that Merzbow CD for Mego called A Taste Of…(2002). Not unconnected to this conceit is the fact that parts of the album were recorded at Noise Cafe iL, a bar and coffee shop in Takamatsu which looks like it could be one of the coolest places on earth; its name derives from a truncation of the Public Image Limited logo. From 21st January 2016.