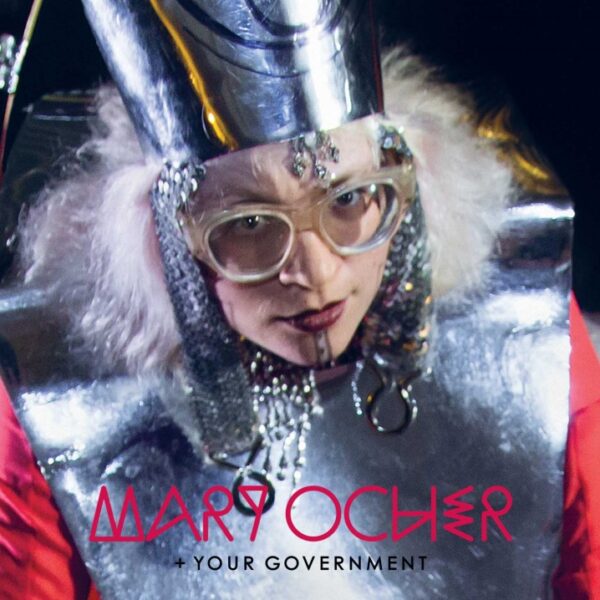 Mary Ocher is a true one of a kind personality whose charisma and presence is all over the album Mary Ocher + Your Government (KLANGBAD 69), her 2016 album made for Hans-Joachim Irmler’s Klangbad label…in a short space of time she’s established herself as a queer icon and underground heroine, and is all set to supplant Peaches as the European locus of sexual emancipation for everyone through flamboyant stage shows, crazy outfits, and no-nonsense disco music. Actually she’s more about political emancipation than sexual, as we’ll see when we get to her anti-war songs, but you get the idea. Ocher does it by channelling the spirit of Klaus Nomi, in both her outlandish outfits, makeup, and her mannered, operatic singing voice – which some critics are content to describe as “quirky”, but that’s doing a disservice to her uncanny and quite graceful acrobatics, which flip-flop between Yma Sumac styled high notes and the clipped, authoritarian barks of a less user-friendly version of Lene Lovich. Klaus Nomi by the way has been an unfairly neglected figure, who I gather continues to be regarded as a preposterous buffoon by many, but his operatic-disco records from the 1980s will have their day in the sun yet.

Your Government is the name of a backing band put together by Mary Ocher with a rotating membership. For this record, Ocher is joined by the duo Stefan Widdess and Oliver Rivera-Drew, who provide a solid tribal drumming backbeat and discordant synth tones to accompany La Ocher. The players are content to turn in a solid workmanlike performance, which I think is just right for allowing Ocher’s strong personality to shine; they’re everything an early 1960s beat combo used to be, keeping their heads down and just playing straight-ahead rhythms and riffs in order to provide a vehicle to the star. The record is also helped by a strong production team: Jochen Stroeh (engineer), mastering by Fred Kevorkian, and King Khan (who provided advice on one track).

Mary Ocher has toured extensively in recent years and her spectacular American and European shows have been creating quite a stir, with the critics calling her everything from a queer icon to a folk diva and modernistic torch singer. You’ll probably be unsurprised to learn she’s based in Berlin just now, just the right locale for her multi-cultural and pan-sexual talents to thrive, but she was born Mariya Ocheretianskaya in Moscow, and lived much of her early life in Israel and Tel Aviv. There appear to have been various dramatic high points in the strange life of this Russian Jewess that go some way to affirming her semi-outsider status, and for whatever reason a lot of her songs have strong anti-war and anti-authority themes. Key albums in her catalogue – she’s been active for many years, starting out as Mary And The Baby Cheeses – might be 2011’s Eden, the solo album War Songs from 2008, and The Fictional Biography of Mary Ocher. Based on the cover photos here where she might be mistaken for a cross between Sun Ra, June Tyson and George Clinton, it might not be too far-fetched to propose that she record a version of ‘Nuclear War’ some time soon. On the other hand, she also likes David Bowie, and her cold, disaffected reading of ‘Where Are We Now’ is tacked on the end of this album as a bonus track. From 18th January 2016.

Post revised on 13th June to correct some inaccuracies.