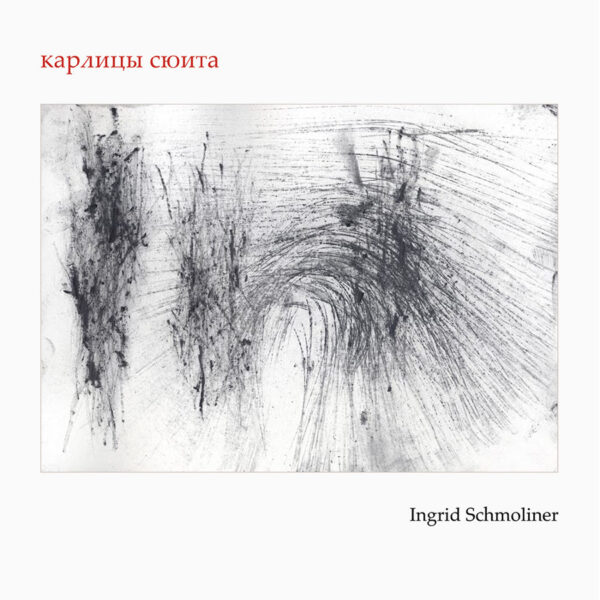 Surprises abounded on my first listening of this cold and lunar looking LP of prepared piano performances, where red-fonted cyrillic breaks an otherwise bleak and monochrome sleeve-gazing experience, and the minimal word count on the rear suggests a rather painful by-the-word printing cost. But the clues are there: those repeated charcoal-on-snow gouges that form the cover image attest to the maniacal obsessiveness with which Austrian pianist Ingrid Schmoliner attacks her chosen instrument. Stuart Marshall noted her exploratory methods when reviewing the improv trio Para’s ‘skeletal’ interactions, and her journeying within clearly did not end with that sparse and sometimes rather distant effort. If anything, [Dwarves Suite] sees her deepen her enquiry into the piano’s metaphysical body, with the intention of dragging some ancient unspeakable into our quivering realm.

Our stern-faced composer locks from the first into the same unrelentingly mechanical manner with which she closes closes the album, exhibiting an intensity that meets and exceeds press descriptions such as ‘tribal trance’ by virtue of the music’s non-electronic origins. In fact, precious little here was generated electronically, just some E-bows, ‘recorded without overdubbing’ she hastens to add as if to mollify the analogue luddites. Instead, she favours a primordial and percussive form of performance; one bordering on invocation. Fittingly, Schmoliner conceives of the suite as a modern expression of a mythological cycle, that of the saga of the Percht; a midwinter female goddess who resides deep in the Austrian alps. One must assume that such holy patrons would not be displeased by her indefatigability, nor her downright ferocity, in her exhortation to their ancient ways.

In between Schmoliner’s menacing bookends, the listener passes through charcoal variations of the same cyclical rhythms and clusters, sometimes only faint in resemblance so as to permit voice to resonant metal winds, dimly ringing bells or ghostly, Thomas Köner-esque foghorns that ache across the arctic night, summoning us from the first side to the second while heavy footprints loom nearby, alluding to clandestine night rites and feral cousins to Pierre Bastien’s otherwise charming robot orchestras. Though clearly adept at creating uneasy settings, she is equally compelling and if anything, the record’s brevity is a virtue, encouraging repeated listening while reminding us that playback forms part of a never-ending loop, which will eventually reveal its true face to the more enquiring of us.