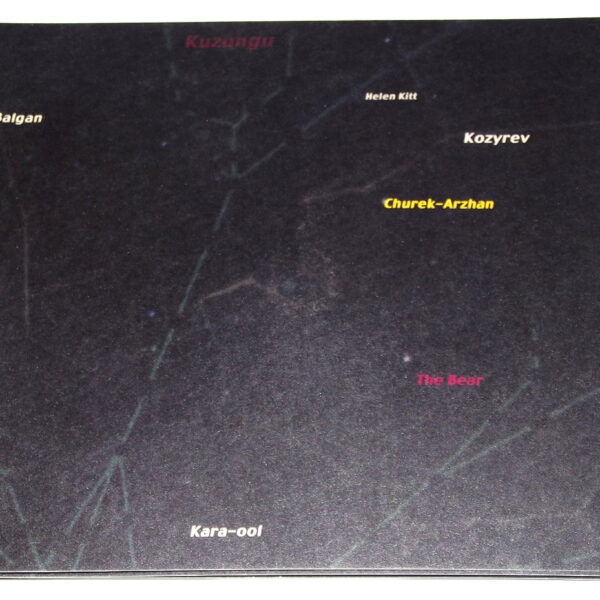 In K-Space’s omnidirectional blackness we bear witness to suspended temporality, wherein stars are both entities and life events splayed across an indefinitely elongated instant. The darkness is that of life unmanifested, and this duality is wed into a measureless nightscape into which the group takes flight, delivering a performance that unites the sonic equivalents of empty space and stellar incandescence. In more terrestrial terms, the performance was recorded on April 2009, in Catania, Sicily, to what one might assume was an attentive audience; given how silent and unobtrusive it is until the end. It marks a wildly different take on K-Space’s meditation on the infinite, as expressed in Infinity (2008); a CD ROM in which 200 recordings are perpetually reorganised into an ever-morphing, living improvisation.

Modalising their stated motivation into a small hedge, the multi-instrumental trio of Tim Hodgkinson (clarinet, lap-steel guitar), drummer Ken Hyder and Siberian vocalist Gendos Chamzyrin liken their journey to a shamanic trance, or ‘what may happen when a shaman…goes into (one)… not necessarily knowing what he or she is going to encounter’. Such claims may chafe the odd listener, depending on their tolerance for numinous rhetoric, plus one could just as easily state that improvised situations should always lack predictability. However, the trio’s patient pacing, ceremoniousness and (initial) sobriety as they unfurl a seamless trio of ‘personal traveling songs’ – betoken a level of reverence appropriate to the task of articulating a ‘higher’ mode of expression than that to which we might usually be accustomed.

The event crawls into action as each musician presents a brief preamble: Hodgkinson flailing clarinet into upper register; great guttural growls and clashing cymbals increasing alarm, until the group ‘starts flying’ around the 18th minute. And soar it does as these elements and more converge in mid-air, to rage like a tarry black torrent through the night sky, a prominent clang or streak of modified howling here and there; reaching a sustained and entrancing (pun intended) climax by minute thirty. Yet in spite of their collective power – notably Chamzyrin’s voluble, aerobatic chanting – the musicians never betray any tendency towards excess, nor do they crowd one another. At appropriate junctures, a pair will peel away to permit solo expression, and not reassemble before time. Individual contributions are so measured as to ensure that the ‘constant ambiguity between inner and outer movement’ remains both paramount and attributable to their finely tuned intuition.

So confident in the effects of the performance that the group maintain that ‘what was committed to the recording medium was truly some kind of an equivalent… to the experience of being there’. Bold words, but at the same time there’s nothing wrong with a suspension of one’s disbelief: in some ways it is more of a challenge than surrendering to kneejerk scepticism. Furthermore, the music itself stands as adequate testimony to what was evidently a powerful experience for all concerned; one (I should add) that will require a few listens, to acquire the appropriate sensitivity for this ritual of unhurried ecstasy.

An unequivocally unhurried (and fathomless) atmosphere greets para-ligo’s listeners as well: Christmas-fattened audio dieters will relish the attention granted to its achingly subtle atmospherics, strewn sparingly with rustling leaves, squeaky doors (or instrumental equivalents) and playful (to painful) plucks at a prepared piano, plus the odd, probing Greek monologue for good measure. Indeed, so sparse is the audio space at times that good headphones are advised, for full appreciation of its textural delicacy and the weight of its silences (ensuring that crossing the road with this on your ipod should not be too perilous). Which constitutes a significant accomplishment, given that the three participants: Elena Kakaliagou (French horn), Ingrid Schmoliner (piano) and Thomas Stempkowski (double bass) are seldom off the job throughout the course of these nine tracks: a fact of which I am amply reminded during a spate of piano string hammering (underscored by some sustained but fragile breath work from Kakaliagou) in ‘Canidae’. For much of the recording, Stempkowski’s rattling double bass tag-teams with the French horn for the role of cohesive agent, creating lengthy, vibratory gestures that have a hypnotic effect, in contrast to the wind section’s more rounded, and vigilant mode of expression (one echoed, incidentally, in Kakaliagou’s two spoken sections), and Schmoliner’s adventurous search for new percussive dimensions within her piano. Praise must surely be due to the musicians for many a judiciously skeletal performance, and maintaining knowing poise between the ‘cross-the-road-to-avoid’ extremes of on-the-job tuning and bored-sounding repetition. While the question ‘how does a chopstick squeezed between the bass strings of a grand piano and hit by cymbal mallets sound?’ seems strikingly old hat in 2014, theirs is nonetheless an approach that successfully teases from the instruments their barest essence, while exploring very different (and interesting) parameters in each piece.