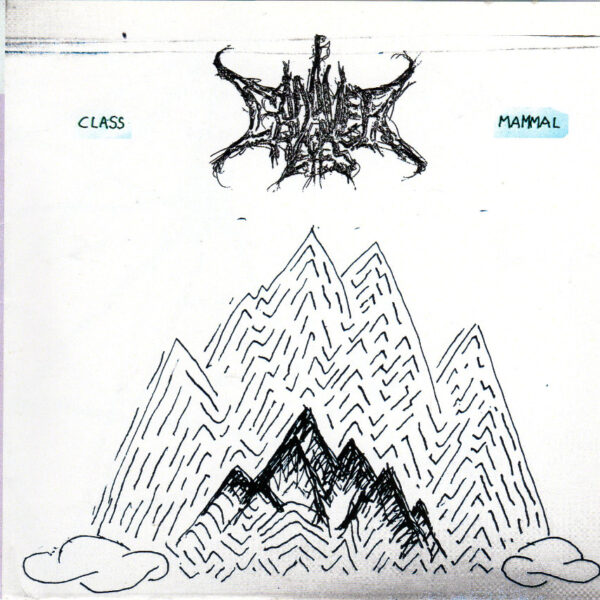 Here’s another scorching blast of intense negativity and doomified howl from Cadaver Eyes, the Israel-based duo of drummer-vocalist David Opp and noise-maker Eran Sachs who we haven’t heard since 2010 with their absolutely uncompromising release Mesarveem Lihyot Covshim. Like their blistering track ‘BaHoref Karrr’ on the 2008 comp What Pleasing The Lord Looks Like-Marriage, their primitive stripped-down take on the noise-doom genre fills me with a combination of fear, loathing, physical nausea and despair, and Class Mammal (HEART & CROSSBONE RECORDS HCB 058) makes me want to leave the room as soon as I play it. Better yet, I should head down to a concrete lined cellar where I can stick my head in a noose. Yet it’s also possessed of uncanny power, making one compelled to keep listening to it; how much further can these two push themselves over the ledge into the abysmal depths? Cadaver Eyes may not really fit the profile of generic doom rock metal…to begin with their music is essentially a free-form blast, not tied down by conventional rock drumming or guitars that play recognisable chords. There’s a drumbeat, for sure, but it’s more like the hammering of an insane coffin-maker building your wooden overcoat in front of your dead eyes, randomly thumping his mallet. There’s a howling, parched, voice, screaming and pleading in abject despair and utter exasperation, yet it’s a true and felt emotion, the bleeding raw wounds of a cut man growing worse and more infected as we behold the sight in horror. This isn’t nice, but it is something real…the average grunting and groaning of your basic fourth-rate Black Metal band seems stereotypical in comparison, an identikit feature of the genre. Cadaver Eyes are trying to push themselves right to the edge of the conventions, and find what they can on the extremities of the frontier. There’s also the raw electronic noise produced by Zax, a bitter snarl and untamed animalistic screech produced from his no-input mixer system which makes a mockery of a thousand laptop softies, preening away with their polite and over-manicured pre-sets. The whole of Class Mammal is recorded in a no-frills near-confrontational manner, probably capturing live performances in a single grasp…this is how it must sound in real life, with no studio craft to smooth away the abrasive edges. 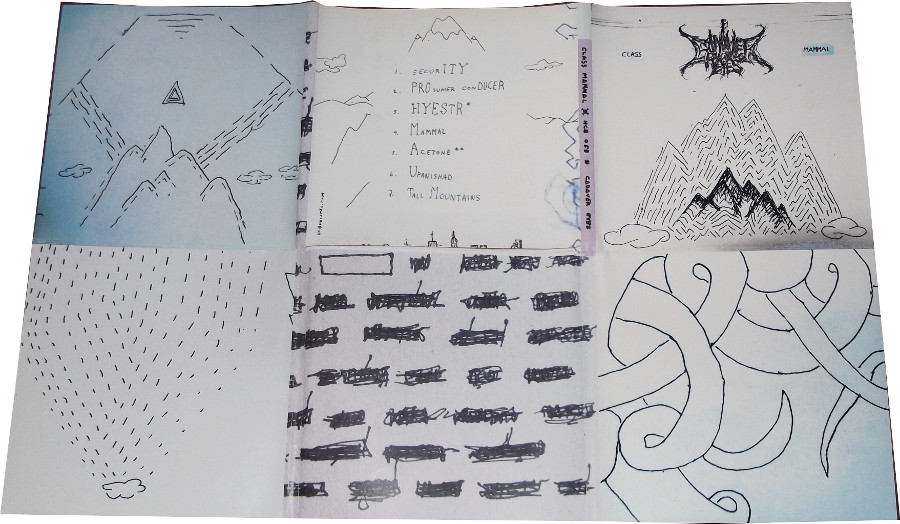 Released in November 2014, this CDR edition arrived here 12 February 2016; I think the fourth album by Cadaver Eyes. The cover unfolds into a set of cryptical doodles, including pictures of mountains, an upside down raincloud, a triangle hovering in the air, and series of words crossed out. The titles reveal very little, and use a mix of lower case and upper case letters to reveal extra hidden meanings. ‘Acetone’ is a cover of a Mudhoney original. Rani Z. wrote a poem about this record and concludes that “Cadaver Eyes Leads to Mental Erosion”, a sentiment I can only endorse.