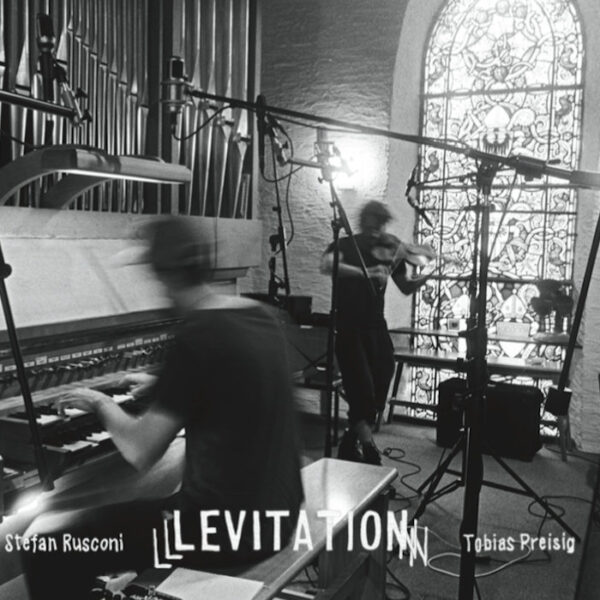 On Levitation (QILIN RECORDS QILIN 011), we have an impressive team-up between two young Swiss jazz musicians, the pianist Stefan Rusconi and the violinist Tobias Preisig. They recorded it in the church of Saint Etienne in Cully, where Rusconi sat himself behind the church organ, Preisig amplified his violin, and both were assisted by the recording engineer Hannes Tumke who employed judicious close-miking to capture “the innermost parts of the instruments”. Rusconi may be more at home on the piano usually; he leads a modern jazz trio who have been making records since about 2004, some of them released on Qilin Records and Bee Jazz; and they have distinguished themselves by recording cover versions of Sonic Youth tunes, and performing with Fred Frith. Preisig’s In Transit from 2012 likewise looks like the result of an eclectic mix of influences, leading him to experiment with a Leonard Cohen cover version and a composition partly inspired by Fauré.

Over time we have at TSP received the occasional record made in a church or cathedral, quite often an improvised record or a piece of sound art. The musicians involved sometimes seem to have an agenda. In some instances they deliberately ignore any devotional or religious aspects of the building they find themselves in, and concentrate on physical matters – exploring the acoustics in a methodical fashion. In some extreme cases I have even sensed there’s an attempt to undermine established Christianity, for instance by bringing secular modern music into hallowed ground, and by extension inviting thought or comment on the restrictions of society, government, church and state. No such thoughts appear to have crossed the minds of Rusconi and Preisig, who in fact were quite respectful to their surroundings, and even felt inspired by the “atmosphere”. Their respect didn’t extend as far as their dress choice, if their t-shirts, jeans, casual shoes and baseball cap are anything to go by, but no matter. That sort of thing wouldn’t have washed in an Italian church, lemme tell ya!

Musically, I think their strongest offering is placed upfront, the opening track ‘Béatrice’. It’s about 15 minutes of delicate and wispy drone music clearly inspired by “spectral” composers, where the pair manage to create surface effects on a par with Ligeti’s micro-tonal work of the 1960s; the press notes even invite us to find comparisons with Pink Floyd, which might be something of a stretch. Via its title, ‘Béatrice’ vaguely evokes religious themes with its tangential reference to Dante; and the music retains a solemn and profound aspect throughout. I’m less impressed by the short pieces that follow, many of which are more conventional arrangements playing mix-and-match games with arpeggios, simple fugues, and clumsy attempts to build melodies; they emerge as unfinished, sketchy, and overly sentimental. Regular readers will recall how the French improviser Jean-Luc Guionnet has devoted a lot of time to learning the complexities of the church organ and developing an improvisational style that is a significant departure from conventional organ playing. Rusconi has not yet embarked on such a venture, and remains blighted by rather ordinary jazz / classical riffing.

Even if my preference is for the open-ended ethereal forms of ‘Béatrice’, ‘Mme Tempête’ is also appealing – four minutes of a stern bass drone, a mixed chord where the only variations are provided by changing the surface of the tone, perhaps through electronic means. And ‘Pour L’Orgue’ wins bonus points for its slowness and duration, probably intending to evoke a ceremonial mood as a kind of updated recessional, while keeping one eye on the works of Olivier Messiaen.

A six-panel digipak created by Paul Polaris features a graphic image clearly proposing an analogy between the organ and the human lungs and the respiratory system; another panel makes its meaning even more explicit, with an embossed golden heart. From 1st February 2016.