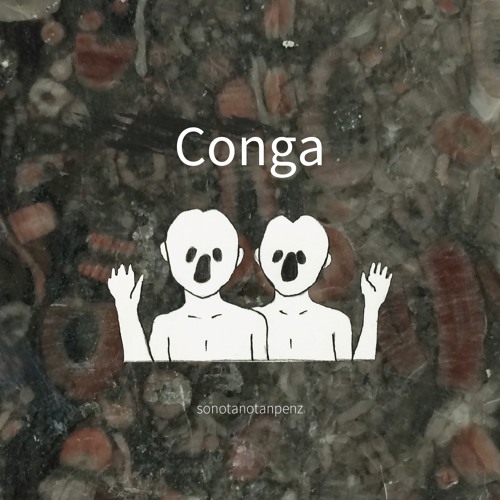 Low-key DIY Japanese charm on Conga (NOBLE LABEL NBL-217), a short album of minimal songs by Sonotanotanpenz – a duo of two young Japanese women. They do it all with acoustic guitars playing simple circular figures, and an electronic box which plays basic rhythms and supplies even more basic keyboard riffs. On top of this barely-there structure, the pair chant, whisper and sing their delicate vocal raps, often breathlessly packing in as many syllables per square inch as the current exchange rate allows.

Although at least two of the songs resemble the kind of wispy introspective pseudo-emotional music that passes for singer-songwriter craft these days (and has often blighted my cup of tasteless overpriced coffee when waiting for a plane in Heathrow), I like about 5 of these 7 tracks…which strike me as ingenious, inconsequential pop with a vaguely futuristic, woman’s take on what the genre of hip hop might evolve into one day, if said genre were left to breed for a few weeks in a flower garden full of moss and frogs. There’s something so wonderfully unassuming about the vocals of Hitomi Itamura and Hitomi Moriwaki; it’s as though they’re got something important to tell you, but they’re also afraid of bothering you, so they stand in the doorway bowing while they bring you a cup of tea, and can’t wait to make their excuses and leave.

The track titles are a simple list that reads Cave, Tea, Map, Bagpipe (or Bug Pipe, which is a much better title), King, Conga, and A Farm And The Universe; they are exactly like titles for images in a children’s book, one which starts off with simple shape recognition and which ends with a deep meditation considering on our place in the world. Maybe this album follows a similar path, but that’s probably wishful thinking. The duo have made one album in 2014 for Kirgirisu Recordings (a tiny CDR label in Tokyo), and also appeared on a comp for that label. This, from 26 February 2016.