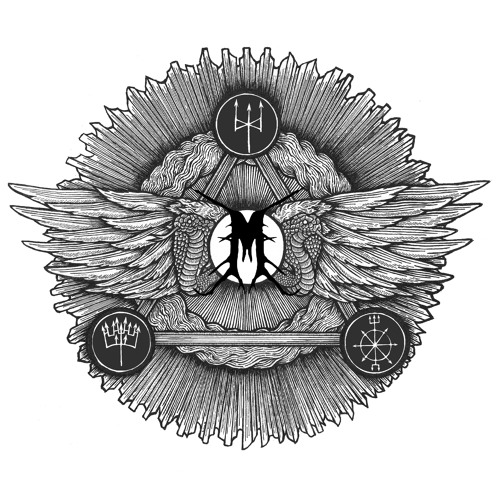 Malign has been an on-off satanic BM project whose three members have been busy in other bands, which helps to explain the sparse discography. “A Sun to Scorch” is the group’s first release since reforming in 2011 after an 8 or 9-year lay-off. The EP consists of just two songs “A Sun to Scorch” and “The Love of Abysmal Wrath” so it’s virtually a long single with an equally long (in fact slightly longer) B-side and could be Malign’s way of re-entering the black metal scene, bit by bit, to see if there’s still fire in the project.

The title track sprints off on a rocketing metal beat around which guitars steam and riff and drums thwack along at medium-fast, almost leisurely pace. The vocals dominate but singer tends to pronounce the lyrics in an even tone, almost as if he’s reading from the song-sheet. The song mixes sudden bursts of blast-beat aggression with the steady-as-it-goes melodic melancholy. Some time after the halfway mark when the singing fades away and the music reduces to a solo guitar coasting along, this listener starts to expect something very special … I’m still waiting … um … oh well, never mind.

“The Love of Abysmal Wrath” is a much more dramatic creature with surging riffs and rhythm, and singing that now has some feeling. This is a more complex song as well with melodic acoustic sections featuring some atmosphere (even if minimal) mixed with jaunty riffing and a howling lead guitar solo. Without a doubt the second song is far superior to the first – it definitely has more energy and variety, and the musicians put more passion into this than in the other song. The title track does feel as if the guys are treading water. Both songs generate a lot of momentum but they don’t quite seem to handle the mood and escalating emotions too well, and when they pass, I feel as if I’ve been left hanging off a tree branch wondering what’s gonna happen next.

There’s not much here that distinguishes Malign from other satanic old-school melodic BM bands so if the musicians are very serious about continuing the band with a view to releasing more work and touring the music, they need to think about introducing other instruments or some unique musical element into their style. If they’re happy keeping Malign as a side project, releasing short works now and again, then they can continue as is.