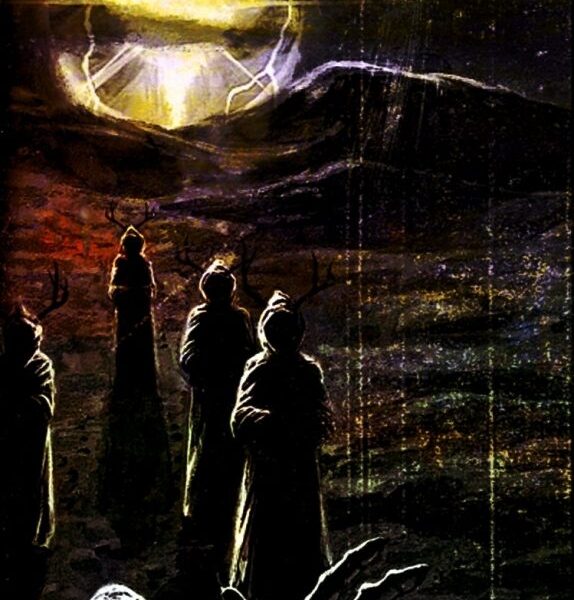 This EP by Canadian ambient BM solo project Sanctuaire is all ambient and no BM so those of you keen on the latter matter should jump ship at this point and sail elsewhere. Why Sanctuaire should have issued a completely non-metal instrumental EP might baffle some people, other than that it represents something Monarque must have wanted to get off his chest. After a few hearings of this EP, I’m stumped myself as to why the EP has to exist as it’s no great addition to the genre of epic dark ambient instrumental music. The style generally mimics orchestral music and for the most part is low-key and subdued.

For the first several minutes we’re treated to some fairly bland rumbling dark musings until we arrive at “Forge” which is descriptive of what is contained within: brooding incipient thunderstorm cloud wash develops over a steady chugging machine rhythm suggestive of a dark Satanic-mill type of iron foundry, all overshadowed by swooping shadow drone menace. There is a steady build-up of foreboding and tension and any moment the heavy clouds might break and release their load. “Impression d’Automne” is a fairly pallid track of synthesiser-generated wash layers and yet it’s probably one of the more interesting pieces, with some actual melody and a definite atmosphere – which is not saying a great deal for the EP.

The EP suffers from not having a clear identity with the majority of tracks being mostly insipid and washed-out drone tone impressions. Those tracks most likely to impress listeners are “Forge” and a couple of others which feature deep cold-space ambient and which hint at universes within the music too deep to be heard yet sensed by the unconscious mind nevertheless. Most tracks are no more than six minutes long and the music might actually benefit if it were longer so that any themes within could develop to their full atmospheric potential. As it is, for such short pieces there’s not much happening and the potential for listener boredom is very high.

I don’t like to say that I’m relieved when a recording finishes – I want to say I want to hear more – but on this occasion I really was glad when the music came gliding to its sad end.