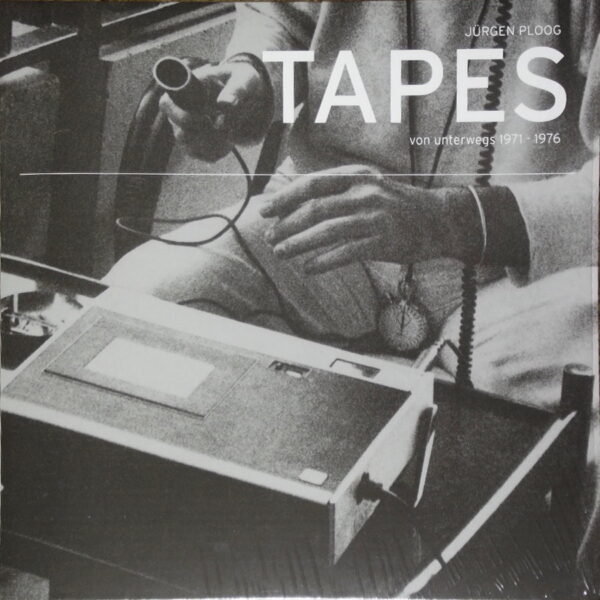 The album Tapes Von Unterwegs 1971-1976 (90% WASSER WVINYL 018 / MOLOKO PLUS PLUS 079) is by Jürgen Ploog, a German experimental writer…it’s extremely unusual and a fascinating document, besides being a compelling listen…at first glance, I thought it was simply a collection of interesting field recordings captured on airline flights in the 1970s, and that’s how I initially approached the strange jumble of disembodied voices, radio static, and fragments of messages.

In fact it goes a lot deeper than that. To begin with Ploog was a pilot, not a passenger – he worked for Lufthansa for 33 years. I’m assuming this means he had direct access to more radio messages than the average traveller. The tapes are partially a document of his travels, but not in a touristy manner; using his portable tape recorder, he captured radio signals, announcements on the plane, voices of passengers and crew, and also fragments from his hotel room and cities overseas – TV and radio snippets by the cartload. Foreign voices, an international survey of jabbering. Media communication, official communication. But he’s certainly not after some banal travelogue effect; rather, this is the impression of a rather restless and unhappy mind. “My life was a series of interruptions,” he writes, “both geographically (outwardly) and psychologically (state of mind) with exposure to different countries and the constant effects of jet lag.” At one level then, he succeeds in representing very successfully this near-delirious condition of his brain, unable to make sense of the multiple layers of information with which he’s bombarded.

On another level, it’s also interesting to hear these documents of assorted bits of old-school hardware – typewriters, telephone dials, aerial televisions badly tuned, interference on the radio…added to which, there’s Ploog’s own portable tape recorder and magnetic tape. Contrary to the smooth presentation offered by digital methods, we have a view of the previous generation of analogue technology and how we used it across the world. This may be just a by-product of the time it was recorded, but it’s still of interest. Ploog was probably more concerned about how these devices were failing us, not presenting clear signals, and wondered if deeper messages were embedded somewhere in the distortion.

There’s a third, more important, dimension…interspersed with the field recordings are recordings of Ploog himself speaking certain texts, perhaps his own writings. The entire assembly of Tapes is thus a sophisticated form of the cut-up, and Ploog is advancing the ideas of fellow Beat William Burroughs (they knew each other very well), looking for the truth to leak out in between the interstices of the edit, hoping to glimpse the future in snatches, and exploiting the power of the tape recorder, and the tape splice, as much as the written word. In this light, it makes sense to see Tapes as an extension of literature, rather than as pure sound art (regardless of how it may overlap with certain Sound Poetry experiments). “Cut-up as a drug that leads to a different relationship with language,” is how Ploog intended this work to function, “just as a hallucinogen leads to an altered relation with the so-called reality. The result is a fundamental shift of meaning.”

The collection before us is a selection made in 2014 by Robert Schalinski, who did further montage and editing. Schalinski is a member of the Berlin art group Column One, whose double CD we recently noted here. This is a very strong introduction to the work of Ploog, who is highly regarded as a seminal figure in the “German-language literary underground”. Along with Jorg Fauser and Carl Weissner, he was co-founder of the small-press zine Gasolin 23 which ran from 1971 to 1986, which featured contributions from avant-garde writers and artists such as Burroughs, Bukowski, Ginsberg and Warhol.