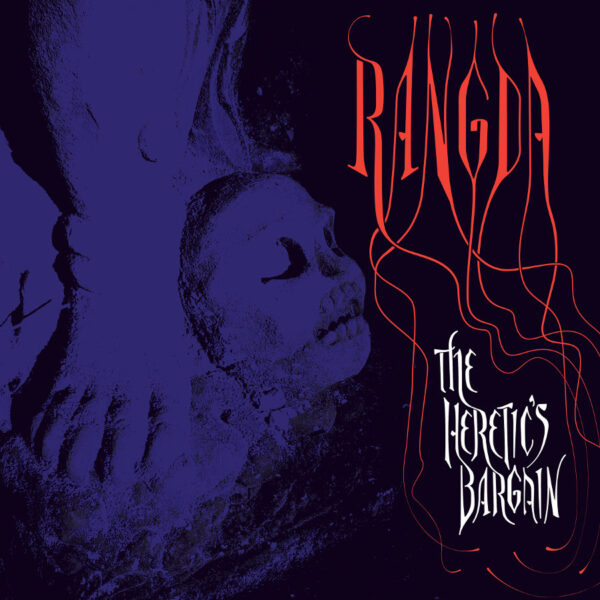 Excellent LP of guitar instrumental mayhem by avant-supergroup Richard Bishop, Ben Chasny and Chris Corsano, performing as the trio Rangda – taking their name from a demon queen famed in Balinese mythology with her bulging eyes, fangs, and lolling tongue. I’ve clearly been out of touch with following the career of Rick Bishop since demise of Sun City Girls, and indeed this Rangda trio also, since evidently they’ve been touring and recording for many years, and this is their third release for Drag City following False Flag (2010) and Formerly Extinct (2012) with its dazzling cover art of two toothy grinning bears’ heads yoked together. The Heretic’s Bargain (DRAG CITY DC633CD) delivers weirdness and aggression in equal measures, yet remains sharp, crisp, user-friendly, maybe even fit for radio play. It kicks off with three tasty “avant-surf” guitar instrumentals, incidentally a more convincing take on the genre than recently noted Diminished Men, which are energetic, melodic, and tight as a riveter’s greasy elbow when it comes to suave assurance and turn-on-a-dime dynamics. ‘To Melt The Moon’, ‘Sin Eaters’ and ‘Spiro Agnew’ are all highly approachable crowd-pleasing riffster fodder, charging out of the box like souped-up chrome plated hot rods fresh from the workshop of Big Daddy Roth. A Surfaris album for the 21st-century malcontent whose idea of a vacation is to drive a jeep wantonly across some undiscovered African veldt.

Score 20 for the toonz, how about some noise? Well, for long-serving fans who still crave the cruel weirdness of Sun City Girls and the feral electric guitar moan of Six Organs of Admittance, you need to hear ‘Hard Times Befall the Door-to-Door Glass Shard Salesman’, eight punishing minutes of wayward sprawl where the two axeman torture their instruments mercilessly, using techniques borrowed from the strangler and the garrotter. It’s as though they are out to assassinate the guitar, to murder music. Squealing guitar lines and chugging quasi-metal riffs are sewn together at random, like some evil corpse molester wreaking havoc in the graveyard with fresh cadavers. Corsano, expert drummer and quietly efficient powerhouse of rhythm, vainly tries to keep order with his rolls and fills during this Texas Chain Saw Massacre styled outing. A grisly midnight feast.

On the LP version all of side B is occupied by ‘Mondays Are Free At The Hermetic Museum’ (these zany titles doing anything for ya? Good to know the surreal twisted humour of SCG didn’t completely expire when Charles Gocher croaked.), some 20 minutes of wild exploratory instrumental work which covers the quasi-ethnic minor-key superfast melodic work which Bishop can perform with ease while simultaneously paring his toenails with a cheesegrater. The epic work soon mutates into even freakier zones, all three players driven by a horrifying pioneering spirit that forces them to keep looking beyond the next chasm, no matter how life-threatening the terrain. The second half of this dangerous voyage sees the trio huddled in a circle and noodling away with a more contemplative circular guitar riff, reminiscent of The Grateful Dead around the time of Blues For Allah, a lesser-known strain of the guitarist’s art which is closer to weaving blankets than making music. “A band with a shared intuition” is how the cissy press notes describe the tightly-interlocked musicianship on offer here. I would prefer to think of Rangda as a three-headed long-necked monster, raging against its cruel fate and breathing supernatural fire at the world. From 25th February 2016.