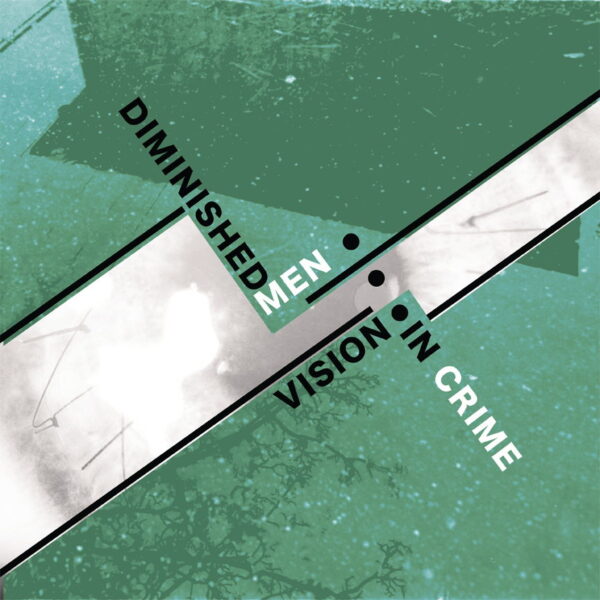 We heard from Seattle guitarist Steve Schmitt in 2015 with his solo record as The Ruminator, which he made with the help of drummer Dave Abramson. We did duly note the resemblance to surf music, which is not hard to miss, but also that he performed as the lead player in Seattle band Diminished Men. We now have their new LP Vision In Crime (ABDUCTION RECORDS ABDT056) before us, a splendid set of exciting guitar instrumentals, where once again the drummer Abramson is present along with bassist Simon Henneman, and the 11 pieces are released on Abduction Records, home to Sun City Girls.

Diminished Men borrow from several pretty cool influences, including ethnic music, movie soundtracks, and surf records; evidently they tend to attract the kind of press which gets written when music journalists are busy running imaginary movies in their heads as they listen – usually citing film noir and “hard boiled cinema”, genres which I would associate with the movie world of the 1940s rather than the golden age of Dick Dale, which I think begins in the early 1960s. Even so, I dig where these associations are coming from, and the lively evocative tunes plucked by Schmitt and team can’t help but activate the mental black-and-white television set some of us still have implanted in the brain. Besides The Shadows, The Surfaris and The Ventures, one could favourably compare some of these tunes to Henry Mancini’s ‘A Shot In The Dark’ (an instrumental beloved of everyone from Combustible Edison to the Bikini Beach Band), and (in places) to Sun City Girls themselves – even though Diminished Men lack the crazed energy of Rick Bishop’s guitar attack, and have not one iota of the surreal nastiness of Alan Bishop in their taut, but fundamentally easy-going, music.

However, happy to report this release is much better recorded and produced than The Ruminator record, and Schmitt’s melodies are improving their aim somewhat, even if they don’t always hit the target. Vision In Crime also suffers slightly from a certain monotony, much the same as any 1960s instrumental LP by their heroes (which at least had the benefit of being incredibly short), which may have something to do with the rather airless sound; if you dig the sound of reverb heavily applied to every single guitar stab, you’ll be a very satisfied customer, but after a while so much slapback echo just makes everything seem unreal. For aural variety, a short spoken-word track is provided on side one, called ‘Preparedness Actions’, a cut-up which seems to have been lifted from a nuclear attack awareness tape. I have no idea what it’s doing here, unless it’s to further the vague mood of “sinister doings” implied by these Mystery Man TV theme tunes, but in this company it sticks out like a city dude on the beach without a suntan.

The cover art is a complete disaster area; its appalling layout, bad typography, uncertain photographic imagery, and sickly green colours are certain to repel potential customers, and it tells us precisely nothing about Diminished Men or their music. Arrived 25 February 2016; official release date 4th March 2016.