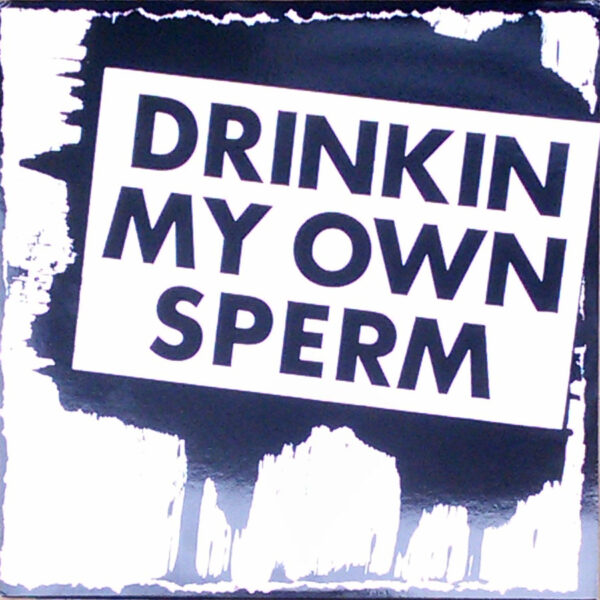 Very excited and happy to receive this recent reissue of Drinkin My Own Sperm (FEEDING TUBE RECORDS FTR 174), the astounding 1977 debut album by Alvaro Peña-Rojas. He self-released it under his stage name Alvaro: The Chilean With The Singing Nose, after he had organised and paid for the recordings himself, and he plays most of the instruments and sings, ably supported by the drummer and singer Antonio Narvaez. It was released in London at the height of Punk Rock; at the time, Alvaro, a refugee from fascist Chile, was associated with Joe Strummer, played in The 1o1-Ers, and was living in a squat. This was in spite of the fact that he had a career in advertising in London; matter of fact, one of his motivations with this record was to subvert advertising in some way.

I’ve got a lot invested in this record personally. By which I mean I care for it very much. I didn’t exactly buy it when it came out, but I do have an original copy which I purchased by mail order in 1981. It had a deep effect on me. Recently, I was lucky enough to meet Alvaro and interview him about his life in London, and the making of this bizarre record; you can read all about it in issue 23 of TSP. With its attention-grabbing title and the year of its release, you’d be forgiven for thinking the record was an attempt at Punk Rock, or perhaps a strange and misguided bid to cash in on the phenomenon. When you play it, there’s no amplified guitars and very few drums, and no screaming vocals by some cheap impersonation of Johnny Rotten. Yet it’s true to the “spirit” of Punk, I would argue, because it’s such a personal and utterly uncompromising vision, realised by a very single-minded and singular fellow; and with its DIY credentials (entire production paid for from Alvaro’s pocket), it foreshadows a lot of what the post-punk and indie bands and labels were trying to do. Rough Trade, for one, should have supported Drinkin My Own Sperm, and there’s no evidence that they did; maybe it was too radical even for them. 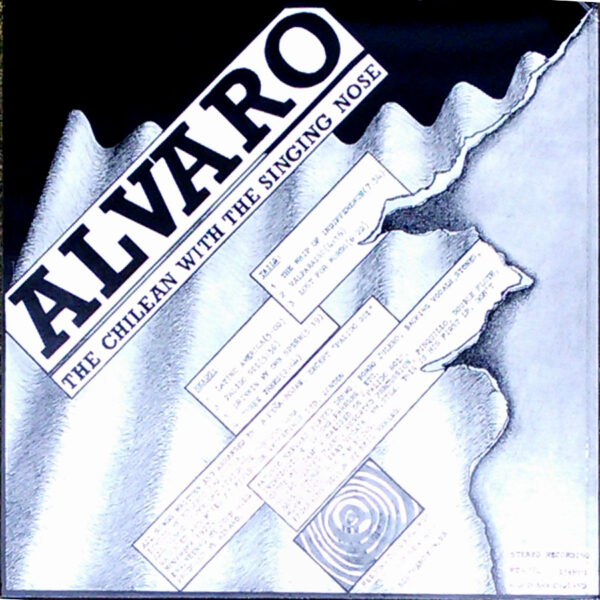 Alvaro doesn’t sing or play punk rock on this record, though. It’s all songs, every one of them based around the acoustic piano. He delivers a species of Latin American inflected folk song crossed with upbeat and very jagged rhythms, sometimes straying into very romantic cocktail-hour lounge jazz. He tries his best to “rock out”, on some songs on the first side, with his very limited set-up: acoustic piano, a non-rock drummer, and the help of a “faik bass”, which in fact is a bass Moog. Through clumsy overdubs that don’t quite match up, and his own drive and determination to keep the song tempo going, Alvaro manages to come up with a crazed form of syncopation that in places defies belief. On the first side, the songs tend to pile up at the end in a delicious riot of overdubs: vocals, nose flutes, crashing piano chords, and percussion, all expressing the turmoil and chaos that rages through Alvaro’s brain. And doing it mostly acoustically, I might add.

Then there’s his singing voice, one of the elements that comes across most strongly on today’s spin. It is full of passion, emotion; in trying to express his despair and anger at the world (be it the political situation or just plain boredom) he twists his larynx into near-impossible shapes, growling and hooting as needed to make sure he’s understood. It emerges as somewhat eccentric, for sure, perhaps even a bit humourous; but it’s genuine. This is something I felt back in 1981, and still feel it today; 99% of other vocal recordings somehow drain this away in the production, to give us an “acceptable” listening experience, but Alvaro managed to keep it all alive and intact, raw and bleeding edges and all. There’s a directness of communication here that is rare enough to begin with, and something that’s even harder to capture on record.

Speaking of communication…I noticed on today’s spin how little of the record is actually sung in English. About half the lyrics are sung in his native language, and though there’s a lyric sheet and translation provided, it may strike one as a little unusual for a record made in London with the hopes of selling to an English-speaking audience. But its also true that this language barrier is not a barrier at all, and the truth of Alvaro’s meaning will be self-evident as soon as you listen. The humanity, the emotion hits first; when you have the time, pore over the lyrics and start to untangle the meanings for yourself, a process which is very rewarding on the superb (though uncharacteristic) ‘Palido Sol’, as close as Alvaro got to making art-rock music in the vein of RIO groups such as Henry Cow 1. 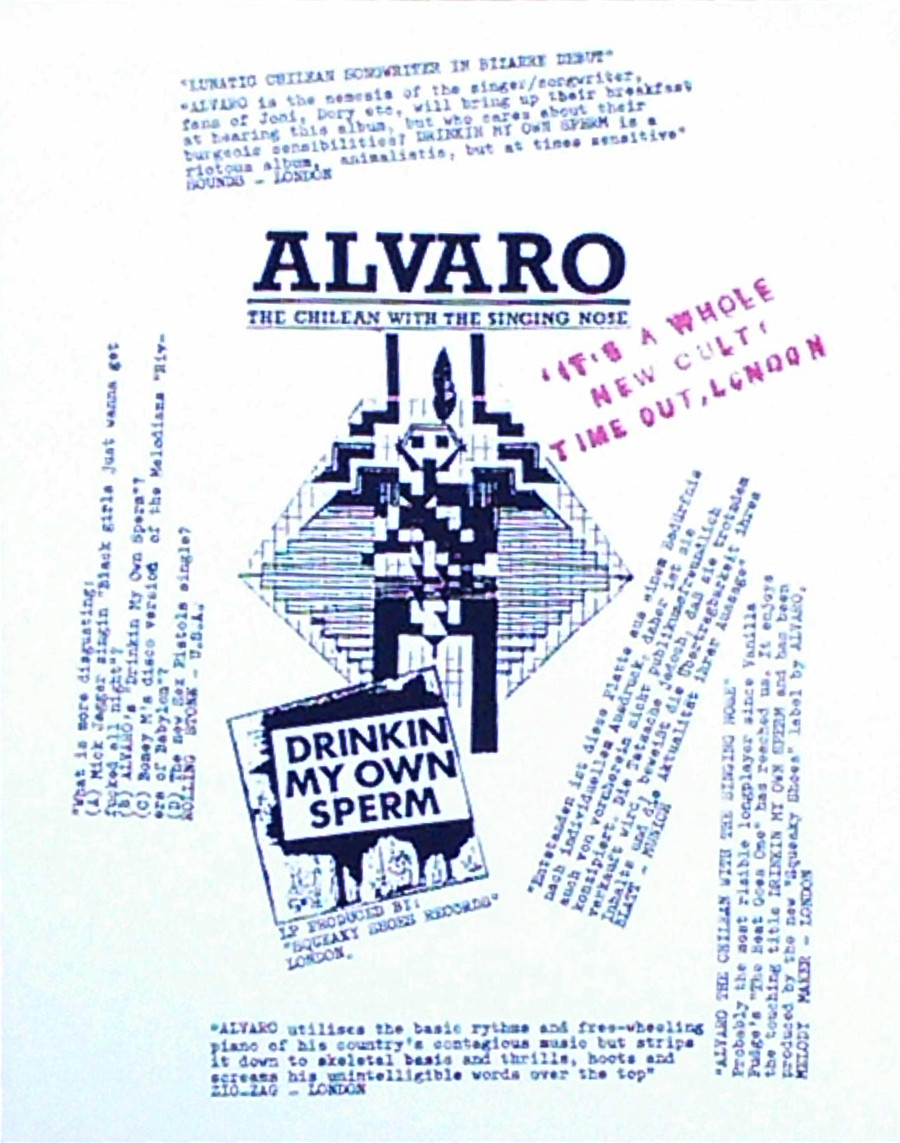 I will single out the title track. In terms of its musical construction, it’s got a stark simplicity that would be the envy of any UK cassette band or post-punker who was working so hard and earnestly to reverse the trend of a million excessive and over-produced Rick Wakeman LPs; if that was part of the NME-inspired post-punk agenda, Alvaro achieved the work effortlessly, and with no-one even noticing at the time. This track contains such jaw-dropping dynamics – by which I mean yawning gaps and silences inducing electrifying tension – that even This Heat could have learned a lesson or two. It also boasts Alvaro’s most mannered and bizarre vocals, where in places he’s transforming himself into a monstrous yawping entity, groaning from the bottom of a pit, in order to speak of his own frustration and boredom. Which is the key theme to the song, and the entire album; masturbation, here bizarrely extended into a sex act that involves consuming one’s own ejaculate, is a metaphor for the futility of life. The metaphor is echoed in the song by other grim glimpses of life in 1970s UK; one of them involves listlessly drinking tea, another waiting for the social security cheque to arrive. By the end of the song, both Alvaro and Narvaez are repeating “Cannibalism! Cannibalism!” (in English and Spanish) with incredible gusto, trying through some primitive chanting ritual to keep the horrors of life at bay, while realising modern man’s predicament: we are eating ourselves alive, simply because we’re bored. Today, we do it through Twitter, Facebook, and selfies, but it’s no different; it’s all part of the same quagmire of vanity.

The LP is lively and upbeat on the first side, sad and introverted on the second side; this is signalled to us through the “Heads” and “Tails” titles for each side. Life’s like flipping a coin. The poignant sorrow induced by “The Whip Of Indifference” is a mixture of resignation and rage, reflected in the mood changes of this beautiful piano ballad; soon, that same indifference is felt after ‘Valparaiso’, a song of homesickness for his home town, which after a great build-up by an imaginary impresario in an imaginary nightclub, is greeted with sarcastic applause by an imaginary lone member of the audience. “Stupendo, stupendo,” groans this listener in world-weary tones, clearly unconvinced. Ironically, Alvaro’s audience has probably not really grown that much in all this time (apart from the good people at WFMU, who always give him a warm welcome), but his determination to get his message to the world has not diminished one bit. 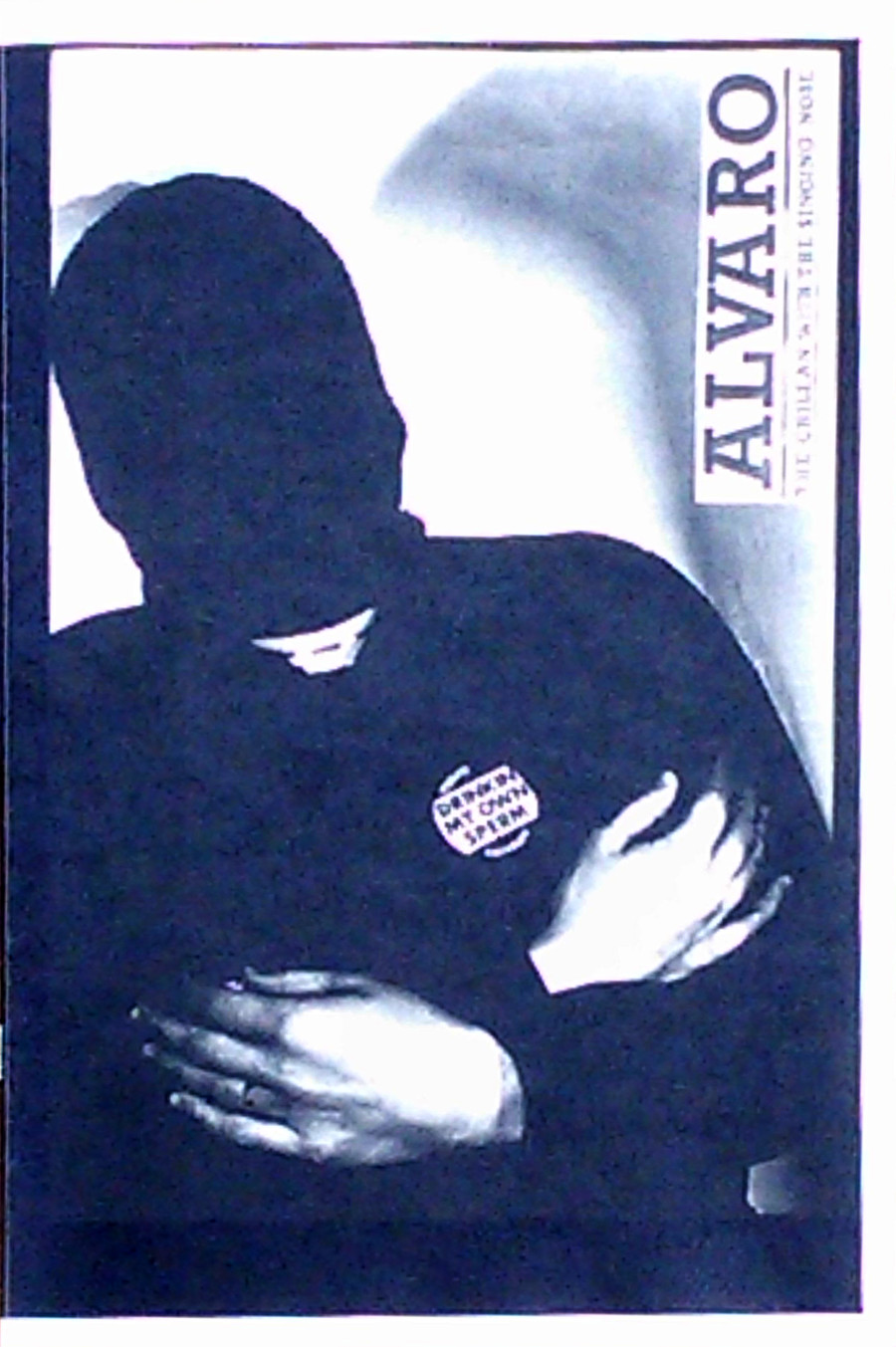 Now presented by Feeding Tube Records, this reissue includes a splendid booklet of notes by Byron Coley, where he tells his own story of how he first procured and heard this exceptional record; I’m pleased to note my own TSP feature has evidently been helpful in his research too. Plus there’s a photo of Alvaro I’ve never seen before on the cover. The reissue pays close attention to the details of the original artworks, and even their own additions are rendered in the correct typewriter font; and the lyric sheet insert is included too. We look forward to their reissue of his second LP, Mums Milk Not Powder, where the deficiencies of the original pressing will be corrected. Feeding Tube have rescued another superb obscure oddity, one which surpasses even their reissues of Gary Wilson and Orchid Spangiafora. From 27th September 2015.