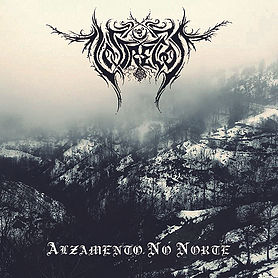 Lóstregos is a new band but its members already have considerable experience playing in mostly death metal bands and this influence shows very quickly on the band’s debut “Alzamente no Norte”. After a low-key ambient instrumental introduction, the guys launch straight into the fast lane of churning steaming guitars, stuttery rhythms, rapid-fire blast-beat drumming and a particularly blood-curdling guttural vocal spitting out lyrics celebrating the folklore and mythology of their home region in Galicia, in northwest Spain, never looking back. Actually, let’s make that two sets of vocals: there’s a higher-pitched vocal that dominates throughout the album and a lower-pitched, more death-metal vocal that sometimes appears.

Although the EP is fast and the music is dense texturally, listeners can hear that the songs have dramatic swagger and in their own way are intensely emotional. “Ouvidos do Monte” sets the pace with a powerful guitar battery that never lets up, even during the more frantic sections of the song, a varied pace going from mid-paced to machine-gun fast, and the stops / starts and twists / turns in melody and riffing often associated with death metal. “Nas treboadas do norte” is just as raw and savage, and if anything even more aggressive and chilling – but there is a sudden change in style as field recordings of heavy lapping waves on a beach and acoustic guitar melody drop by for a brief passionate tango. By turns the song is intense and ferocious in its delivery, ranging from heavy crunching-slab metal melody to rock-out volcanic fury. More bombast and epic triumphalism come with “Ceibes das impias cruces”, suggesting a ritual bent is present here, and the song goes marching off in armour of crunching rhythmic clunk, deep guttural demon voices and thumping drums. Spasms of staccato rhythm, guitar stutter and thudding percussion add extra complexity to a mighty giant of an outro piece.

The EP has its atmospheric, folkish moments with the lapping waves and rainfall but for the most part it’s straight-out blackened death metal crunch with drama and thunder. Overall the music is good though I think the drums need to be thicker and more thunderous, and the vocals more monstrous. “Alzamento …” is a good introduction to the band and its intentions, though apart from the acoustic music and the field recordings the album doesn’t reference the members’ Galician musical heritage closely. This may be something the band might be planning on future recordings.