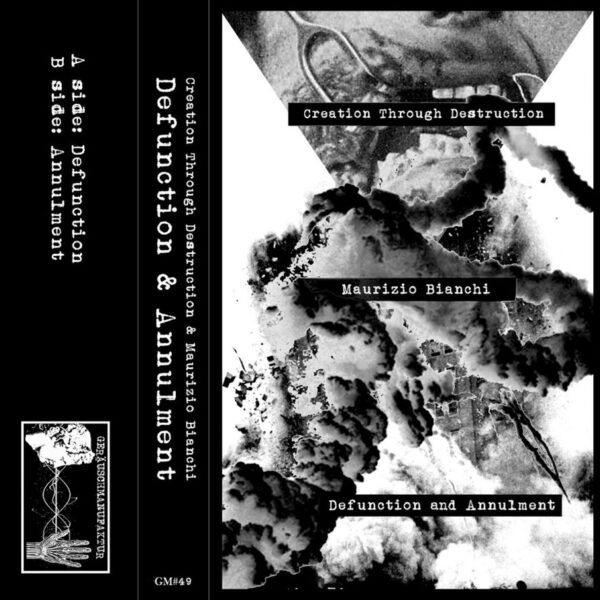 Two sides of nice old-school harsh industrial noise, distortion and feedback on Defunction & Annulment (GERÄUSCHMANUFAKTUR GM#49), a cassette tape that makes up for its brevity (just over 15 minutes) with its intensity and the solidity of its excessive, blasting forms. The tape is a team-up between Maurizio Bianchi and the Serbian act Creation Through Destruction, i.e. Aleksandar Nenad, a prolific noisester who attracts terms like “brutal” wherever he appears in public, and also records as Dead Body Collection and Order of The Violence; as Dead Body Collection, he’s released a staggering 87 albums since 2010, many of them carrying poisonous themes of body mutilation and pain along with an unpleasant whiff of misogynism. Creation Through Destruction has made seven albums we know of, mostly splits with other noise monsters such as Astro, Dissecting Table, and Umpio.

Defunction & Annulment is a good coruscating experience, with a lot of dynamic changes and textures so crunchy you could use them as gravel for a major outdoor building project; it’s been produced by fairly simple means, too, if I’m reading the notes correctly, which allude to damaged loops, feedback made with a damaged contact mic, and no-input electronics. The tape loops used “defected piano” as the original sound source, and it’s comforting in some way to think of a musical instrument being detectable somewhere in the heart of this pulsating, unnatural ugliness. It’s a vile and formless distorted lump, but still dangerously compelling for the listener as it drags us bodily over 15 miles of bumpy terrain, with ditches and brambles lurking on either side of the unmade road. Aleksandar Nenad, referring to himself simply as A.N., did the mix and construction of this mess in 2012, so I’m tempted to regard this as mostly a collaging job and give him the lion’s share of the credit, especially as I’m not widely familiar with the works of Bianchi, even though I know he’s highly regarded and esteemed as an Italian superstar and pioneer of the international noise conspiracy.

Meanwhile the cover art is as retrograde as any identikit cassette tape of industrial noise released in the wake of Throbbing Gristle and their “transgressive” artworks, here collaging vaguely troubling images of storm clouds, explosions, and distressed human bodies. From 14 March 2016.