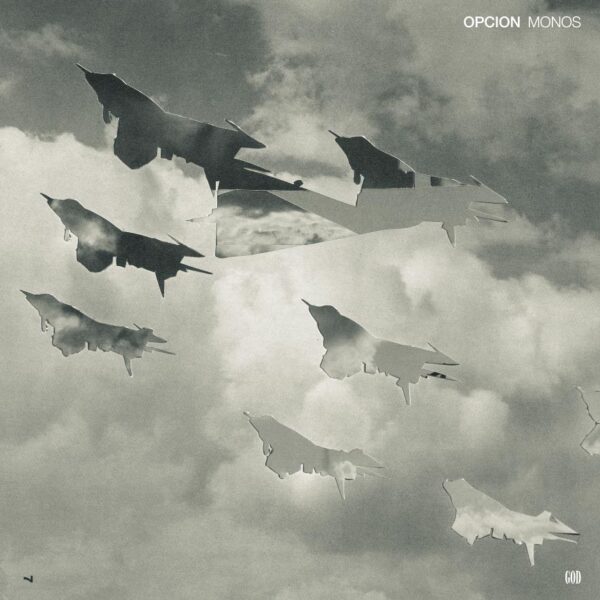 Austrian multi-media performer Opcion might be Nikos Zachariadis, who has previously traded his brand of harsh techno-inflected noises as Ab-Hinc and Canc. Finding a lot to get my teeth into on his vinyl slab Monos/Und (GOD RECORDS GOD32), his full-length debut performing as Opcion, following a couple of short tracks he threw onto the Schiizo Box compilation for Rock Is Hell records in 2014.

On the A side of this platter, he treats us to three solo bursts called simply ‘Monos’ 1-3, exhibiting various aspects of his grim, pared-down and frowny approach to dark ambient electronic noise, sometimes punching home his abstracted messages with nasty fuzzed-up beats and mind-numbing loops. ‘Monos 2’ is the most successful instance here, delivered with a near-merciless approach that will mangle the nerves of any sensitive listener; plenty of razor-sharp tension and dread in every disquieting second of noise. Throughout, it’s interesting to note Opcion’s refusal of conventional structure, and he attempts to break as many rules as possible about form and progression in the space of five minutes.

The B side contains the fruit of his collaborations with three European musicians, duets with Maja Osojnik, Bernhard Loibner and Kurt Bauer. One assumes they improvised together at some point, but it’s hard to tell from the finished works which have been severely distressed, processed, and re-edited to a radical degree. Maja Osojnik recently released the astonishing Let Them Grow, and her versatility with instruments and sound is stretched to the limit on ‘N MO’. Over five minutes of lurching and straining ugliness, driven into a schizophrenic state by Opcion’s over-zealous editing.

Bernhard Loibner’s electric bass is mutated into an alien presence on ‘N BL’, where once again the reconstruction process has been designed for extreme dynamics and maximum shock value, by turns soothing the listener with sweet drones and pummelling us with animalistic roars and heavy poundage to the chest. Kurt Bauer’s violin is likewise twisted beyond any recognisable form on ‘N KB’, demonstrating that the trend of Opcion’s remix strategy leans towards the production of strange and unnatural sounds, with no attempt to realistically capture the voice of any given instrument.

In all these collaborations, Opcion aims for heart-stopping shifts in timbre and tone; it’s as if he’s afraid we’ll fall asleep if he doesn’t activate 18 fire alarms every ten seconds. This guy must be a riot at cocktail parties. To further indicate his aggressive intentions, the sleeve art is decked out with images of fighter planes silhouetted against an uncertain monochrome sky; the planes themselves are cut-outs, visual “samples” if you will, forewarning the purchaser of Opcion’s method and intentions. Very good. From 1st February 2016.