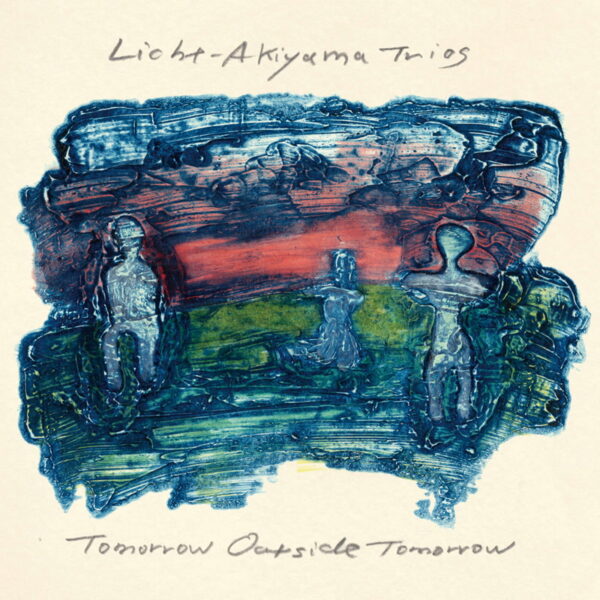 I’m amazed by the way contemporary guitar playing has evidently evolved to the point where we can get outstanding records like Tomorrow Outside Tomorrow (EDITIONS MEGO EMEGO 217) on our doorstep. A team-up between Tetuzi Akiyama and Alan Licht, joined by two guest players, where the sounds of the guitars are so heavily disguised and mutated that we might almost be listening to purely electronic music; and the strength of the improvised performances has evolved rapidly past all known attempts to categorise and pigeon-hole the work.

Tetuzi Akiyama has been associated with ultra-quiet “Onkyo” music, but this music is far from quiet. Licht’s recent efforts have not been sent to us, outside of the impressive Four Years Older (also on Mego and noted here). ‘Blues Deceiver’ is the first of two long pieces here, where the duo are joined by Oren Ambarchi, himself a foremost experimenter who is continuing to push the six-string electric guitar well past acceptable boundaries. I suppose we could describe this as a slow and torturous feedback dirge, filled with abstract groans and lengthy sustained notes, but then there’s strange detail lurking in some of the undefined corners of this nebulous bellow. Music and noise, distortion and clarity; the tension is sustained unfailingly for 20 minutes. There are at least two or even three conflicting moods at work; one of them is depressed and angry, another is trying to find some room for quiet contemplation. One voice negates the whole of man’s existence, another is attempting to piece together a philosophical argument in favour of the continuation of the human race. I seem to be describing a conversation among the Gods, a pretentious observation of the sort I was hoping to escape as I write these lines. Unhelpfully described as a “dank blues” piece by the press notes, ‘Blues Deceiver’ is really getting under my epidermis today, crawling like a living organism whose purpose may or may not be benign.

More of this metallic abrasiveness and strangulated feedback mangling can be thine on the title track, where for the first 6 mins of the piece Licht and Akiyama circle each other like ravenous lions sizing each other up. If the piercing stare of a hawk or hunting dog could be rendered as sound, chances are it would be a noise like this. It’s music that peels away your defences, strips the layers of safety, and does so in quite a painful fashion; at last you have no choice but to face up to the harsh truths that are presented here in guitar form. At this point the duo are joined by Rob Mazurek, the fab Chicago trumpet player who plays as one half of Chicago Underground Duo and whose Don Cherry fixations are very much in evidence on his contributions to ‘Tomorrow Outside Tomorrow’. His tone here is sweet and compassionate, and reminds us of Miles on ‘He Loved Him Madly’. Almost instantly, the two guitarists soften their approach, and to some degree even accompany the trumpeter’s exquisite figures, in so far as this open-ended and very abstract music will support such a conventional notion as “accompaniment”. This results in a deliciously astringent mix of sounds, temperaments and moods, the rough edges of still distorted and treated guitar noise rubbing up against the beautiful cloud-like tones of Mazurek. While this track doesn’t unsettle me as much as the first one, that’s probably a good thing, and contributes highly to the balance (the Yin and Yang) of this record. The work was recorded in Tokyo in 2014.

Yoko Naito did the cover art showing three human-like blobs of blue struggling to find common ground in a highly uncertain landscape, whose red background might indicate a sunset or more likely the aftermath of a nuclear holocaust. A post modern visual update on Matisse, for sure, where the idyll of Luxe, Calme And Volupté is replaced by poverty, fear and discomfort. Essential purchase, highly recommended…from 10th March 2016.