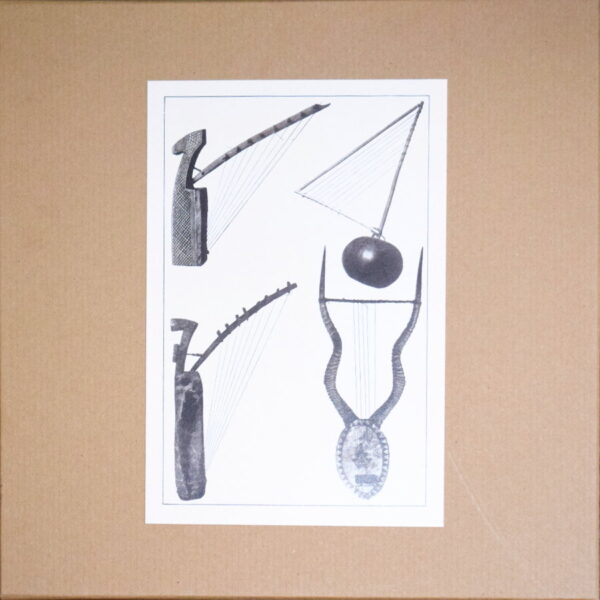 We have a great deal of time for Rhodri Davies, possibly because he’s so genuine as a person and a musician. In person, he always strikes me as very honest and very rigourous, quite clear about what his music is and what he’s trying to do. I think this shows up in his performances, and also his release schedule, which is not overly profligate; he’s not attempting to capture and publish every single musical utterance. The work that does get published – what I have heard at any rate – always has gravity, density, and meaning, rewarding investigation.

Over Shadows is the first album I spun in this Pedwar (ALT.VINYL av058x) box set of four LPs, originally released on the alt-vinyl and Confront labels and now remastered. Over Shadows (av056) is a gorgeous piece realised using the eBow, a technique which I think Rhodri has used on other releases, for instance as part of The Sealed Knot with Mark Wastell and Burkhard Beins. It is a single 36 minute drone of quite heavenly proportions, but it wasn’t designed as one. Davies explains in some detail about the nuances of where the ebows are placed, which strings are chosen, what he’s doing with the pedals, and how he gradually arrived at the desired sounds. He was simply trying to “lengthen the duration of the note”, to push against the natural decay of a resonating string. The work seems to have involved a lot of patient experimentation with physical objects – the “practical considerations”, as he calls it. Over Shadows sounds very deliberate; almost a thought-through, composed piece of modern music for the harp, and represents a clear integration of ideas, instrumentation, interventions, and execution. I can’t stress enough that it’s not simply a piece of process droning, an effect which I’m sure would have been easy enough to churn out by the mile (and fill 10 box sets to boot). The sensitivity and response of the performance is remarkable, the sound of a man completely attuned to his music and to his instrument.

Over Shadows seems to have been originally released in 2007 as Confront 16 on Mark Wastell’s label. Rhodri writes that at this time he was “captivated” by the sound of the ebow, and had to force himself to put them away as his work developed.

An Air Swept Clean of All Distance (av057) has a lot of superficial “resonances” with ethnic music – African guitar music, Javanese Gamelan, maybe even the hammered dulcimer of the Appalachians…by way of Harry Partch. It’s got that fascinating monotony, that strumming insistence. Each piece uses only a few notes, stays in the same key, and keeps returning to insistent root notes. And it has the gorgeous “lilting” effect I’ve only heard on Ali Farka Toure records (I’m largely ignorant of African music). This record was played on a lap harp, a smaller version of the full size instrument which has fewer strings. Apparently this instrument is like a modern update on the triangular harp, which Rhodri describes as “archaic”, possibly referring to the ancient Celtic harp whose basic design can be dated to the 12th century. It also lacks the levers and pedals of the modern harp. “Once tuned, it stays in same key,” explains the musician, “with no possibility of chromatic changes”. Rhodri deliberately limits himself on Air Swept Clean; whatever he can play with his fingers is what ends up on the album, plus there are none of his Cagean “preparations”, nor distortion, nor amplification. This Rhodri “unplugged” record is extremely refreshing and perhaps a little uncharacteristic of his more experimental works, but it sounds beautiful, and has tremendous verve and energy. Originally released by alt.vinyl in 2014 as av057.

The same lap harp with its limited number of strings was used for Wound Response (av038). In 2014 I deliberately mistook this record for heavy metal and described Rhodri’s rebirth as a Welsh avant-garde version of Jimmy Page or Leslie West. This is because of the distortion and amplification being used; where Air Swept Clean is all acoustic, this time he played the harp next to an amplifier through an overdrive pedal. Transducers, contact mics, and a volume pedal were also in play. It was yet another approach to find a way to “extend” the notes; it’s as though every recorded statement were one of a series of formal experiments to find new voices for the harp. He was also doing two highly unorthodox things: “over-articulating” the strings, which is reckoned as very bad practice for conventional harpists; and attacking the strings with a plectrum. The idea was to “force the tuning into new relationships”, which I suppose any rock guitarist describes as note bending, and they have a whammy bar to help them do it with even less subtlety. As Rhodri does this, especially when he does it live, strings break – which is not as easy as you might think. As I often tell people, I witnessed Charlemagne Palestine break piano strings just with the power of his Bosendorfer’s vibrations.

Wound Response is not just about the sound he makes, although the distortion is delicious; the tunes, again limited in range like Air Swept Clean, are like compressed nuggets of psychedelic guitar excess, repeated in a cosmic improvised framework. Repetition and patterns have been for too long regarded as taboo by stodgy English improvisers who felt they had to keep up a constant stream of invention, or perish. Here repetition never sounded so good.

Trem (av055) is the earliest release in the box, and indeed one of Rhodri’s earliest solo recordings, if we count 1999’s Malthouse as his first. It was originally released in 2002 as Confront 11. We reviewed this in issue 12 of the print magazine and noted the highly unusual sounds Rhodri was producing from the harp. He was doing this through a large number of extended techniques and interventions: rubbing strings with rosin, crocodile clips, bowing strings, using polystyrene, that sort of thing. He also refers to an action which involves “depressing all seven pedals midway between position”, which I would imagine is probably one of the more drastic foot movements a harpist could make. Rhodri already sees 2002 as a part of history now, and waxes lyrical about the small venues and fan-organised events which helped improvised music to thrive at this time, possibly because this kind of grass-roots support is pretty much non-existent in the UK now (with a new notably exceptions). If you believe that this sort of music has to be “difficult” in some way, you’ll enjoy the severe, icy tones of Trem; there are lots of outside influences at play and as I wrote earlier, “you can hear Feldman, Behrens, and even a touch of electro-acoustic at work here.” With pieces like ‘plosif’, you also get a rough form of primitive acoustic noise that roars like a beast.

As part of that grass roots aspect, Rhodri has reviewed his extensive collection of flyers, posters, handouts and clippings from that period, and in an effort to pay tribute to his friends and hard-working organisers, has reproduced a number of them and included them in the box, along with extensive annotations. London-based heroes who organised these gigs, such as the Bohman Brothers, Hugh Metcalfe and Richard Sanderson, are thus having their efforts recognised and preserved to some degree. There’s also a double-sided insert of notes on Rhodri’s work written by David Toop. It remains to mention the presentation of the LPs themselves, most of them pressed in coloured vinyl, and given uniform treatment with brown chipboard covers and elegant designs by Jean-Luc Guionnet, printed by Sam Grant. This is not a “career-spanning box set”, which is usually done by committee and intended to cement the reputation of some past-it rock star by taking a very bland “corporate” view of rock history. Rather, this box set is an eclectic selection of some of Rhodri’s best work made by the artist himself, and presented as on his own terms as an artistic statement in its own right. If only Derek Bailey could have curated a Company or Incus box set that was as comprehensive. Limited edition of 250 copies; many thanks to Rhodri for sending this.