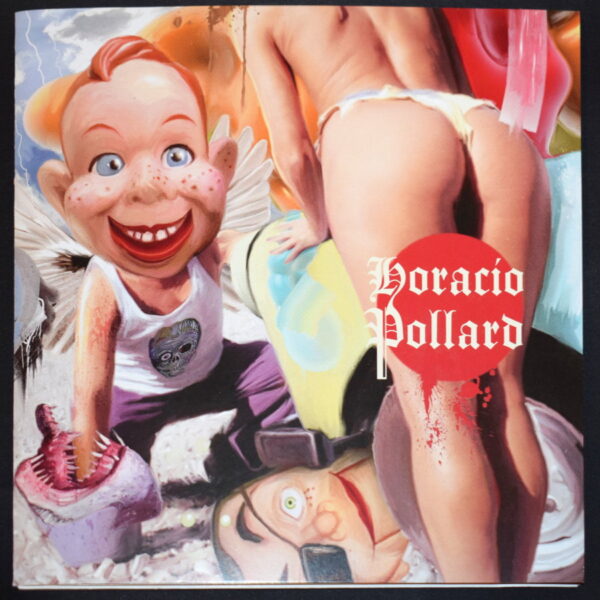 The split by Staer and Horacio Pollard is one of three insane limited-edition art records received this season from the German label Le Petit Mignon. As you may know we always enjoy these bizarre releases which are usually seven-inchers, often on coloured vinyl, and always decorated with far-out eyeball-sizzling visuals printed in full colour to a very high standard. LPM13 ticks all these boxes for sure. Sorry to tell you there were only 200 copies made and it’s sold out already. I know I need to be quicker reviewing these things but I think no-one stands a chance of buying these highly limited items. Horacio Pollard is a TSP personal favourite as we happen to like his warm and human approach to making atrocious and insane noise. There’s something deeply eccentric that appeals for some reason, and you could never fathom out where he’s going from one minute to the next. He has three short tracks on the ‘Blast Side’ of this record. I think I can detect the use of tape loops or wonky repetitions somewhere in the manic stew, but fundamentally the music is just plain nuts; over-layered to the point of suffocation, death by detritus. What a way to go!

Staer are a great Norwegian rock-noise trio with I think Kristoffer Riis, Markus Hagen and Thore Warland in their ranks, though they have made one record with guest sax player Kjetil Möster. They fill up the ‘Acid Side’ of this record with four and a half minutes of aggressive, chattering hammer-rock-death filth, working to mad and eccentric non-rhythms that somehow keep the forward-motion propulsion tuned to the max while allowing for large amounts of guitar and bass blastage and excess. It’s called ‘Dresden Dynamo’, which is also the title of an avant-garde movie by the Structuralist file maker Lis Rhodes. This 1971 film was made without a camera, Rhodes pasting Letraset strips and shapes directly onto the celluloid and its soundtrack. This technique of exploiting the playback head of a sound projector is something I have written about before at some length. It should be noted down and understood by any child who wishes to be a noise musician.

LPM13’s sleeve is by Dave 2000, a French graphiste who has also done animation, books, flyers, posters, banknotes, and record covers, besides associations with computer games and making his own electronic music. In six panels of full colour sumptuousness, he manages to violate about three dozen visual taboos with wanton delight, conjuring up shocking and delirious visions of sex, death, pain and madness, in ways that would’ve given André Breton heart failure. But it’s also informed by a sense of sheer craziness and out-of-control energy, thus perfectly suited to the insane music herein. Don’t visit his website unless you’re feeling in a strong state of mind.