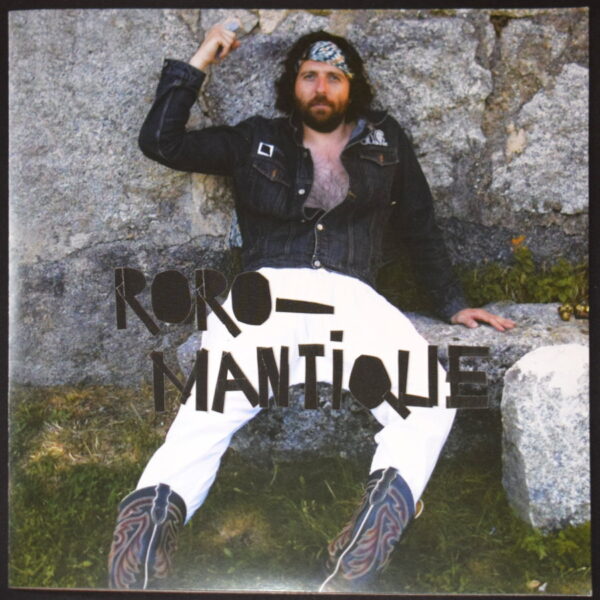 Romain Perrot is one of our personal TSP favourites. This French madman for years practised an extreme form of noise performance art which he called Harsh Noise Wall, whose main feature was an unvarying flat racket of insufferable feedback in front of which he would appear dressed in a black bin-bag. Despite what you may think, there was much humour and ingenuity behind these statements of pure unremitting nihilism. In recent years, he took an about-turn in his music – strumming an acoustic guitar monotonously instead of twiddling knobs. Then he was experimenting with vocals, beat boxes, and electric guitars. We noted one result in 2014 called ta bouche de fraise me rend si sauvage, credited to Roro Perrot et son héroroïne, and it was a primo example of how he was able to deconstruct the conventional song form and rebuild it in his own intense manner. “Deconstruct” is too clever a word in this context, though. Some might call it more of a savage mauling; it’s as though he was a lion or tiger, ripping apart a hundred Bob Dylan records as if they were so much raw meat.

We received Roro-Mantique (DECIMATION SOCIALE NO NUMBER) on 20 March 2014, and musically it’s pretty much in the same zone as described above. It’s a solo EP where he’s joined by two guest performers. There he is (presumably) on the cover, looking every inch the renegade biker gypsy who failed to get an audition with a Jimi Hendrix Experience covers band. On the inside there’s a family group photo that’s strongly reminiscent of the Grateful Dead’s Aoxomoxoa back cover. The EP itself is totally bonkers. On ‘La Cicatrice Blonde’, the manic acoustic guitar strumming creates an absurd background scratchy noise, while there’s also a semi-tasteful harmonium introduction to this parodic love song. The vocals are insane; guest singer Mogui keens out her random phrases in a form of song-speech, aided by an echo chamber which helps the atmosphere of the song. Roro Perrot just grunts and growls like a monster. No verse-chorus nonsense here, nor a tune; it’s totally formless spew that somehow works perfectly. If you’re seeking an underground riposte to Serge Gainsbourg and Jane Birkin, this blast of absurdity might just fit the bill. ‘Lettre D’Amour’ picks up the “romance” theme, and turns love into a nightmarish experience – two echo-enhanced voices screaming at each other. Totally reduces the idea of “love” to its most primal, basic form; the lovers here could be having a row, experiencing orgasm, or writhing in pain – or all of the above. If you enjoy records by Yoko Ono and Junko and want to hear something even more repellent, prepare for two minutes of vocal hell.

The B-side ‘Expectatives Libidineuses’ dispenses with Mogui’s contributions and we’re back to the basic set-up of Roro heaving out his foul grunts along with the worst guitar playing in the universe. He’s joined by percussionist Yoshihiro Kikuchi, and the song stops and starts for no reason, without once managing to generate an iota of positive energy. A perfect example of what the creator calls “ultra shit folk”, and issued under a title that you’d expect to find next to a Salvador Dali painting. Except that there is very little freedom for the libido in this nasty, constipated, song. Like much of Roro’s non-music, it’s trapped in this self-made circle where there is no possibility of release. I hope I’ve managed to sell you on this fantastic release; Roro Perrot is a true Outsider, and it’s very rare to find such examples of strong, raw music, pressed directly from his heart onto the wax.