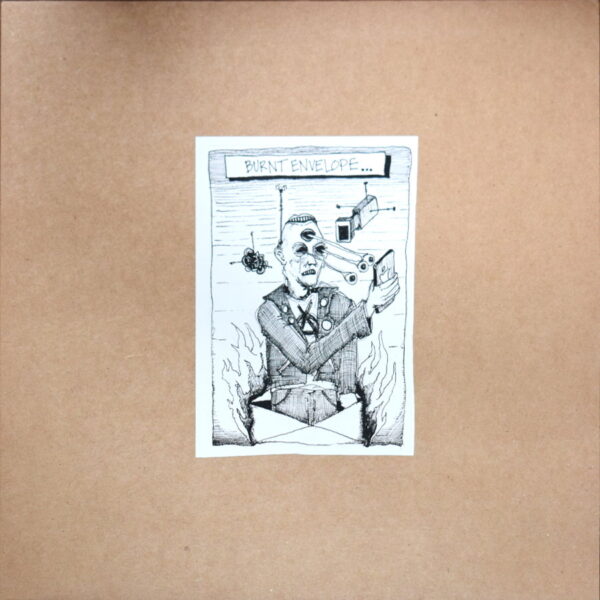 Album of the month, assuming your month is one filled with pain and frustration, would be the vinyl edition of Alien Nation: Collected Singles Thus Far (FEEDING TUBE RECORDS FTR237) by Burnt Envelope. This is a superb dose of poisonous, scuzzy and hateful punk music by Tony Pasquarosa, who is Burnt Envelope, and the songs were originally released as a cassette in 2014 on Burnt Out Tapes.

Pasquarosa presumably plays and sings everything on these short, lumbering bursts of apathetic nihilism, performing in a style not unlike the great US punk band Flipper; I detect the same hollowness in the vocals, and a similar clunkiness to the instrumentation. He sounds bored and listless for every waking moment, yet somehow still finding the gumption to struggle against his condition, while even the lethargic playing of the instruments (especially the elephantine bass guitar) seems to weigh him down like 18 albatrosses around his scrawny neck. Every lyric is filled with broken images of disconnection, alienation, hatred and despair; he describes the daily grind as a pageant of triviality, and no situation is so banal that it can’t be turned into another instance of gloomy fatefulness and utter futility. Even the “Burnt Envelope” turns out to be one of his key images; on the song of the same name, it’s a perfect symbol for how communication fails on just about every level, mainly because he hates all his friends and can’t wait to sever all ties with them, regardless of whatever helping hand may reach out. When they send him letters, he’s doing all the burning, in other words.

Pasquarosa also performs as Crystalline Roses and Snake, and is a member of Aerosols, Frozen Corn (with Joshua Burkett), Fugitive, Gluebag, Heaven and Earth Magic, Mudlark, Viper, and World Domination; most of these bands (I never heard them) appear to play variant forms of nasty punk rock, though there may be a folk and psychedelia side to his many talents. This release includes cover versions of songs by The Doors, The Ramones, and Lazy Smoke, and contains various illustration scrawls and crazy collage artworks. “The first imaginary seven singles by the band”, notes Byron Coley, “may well prove to be one of the most important blurts of New England’s sub underground.” From 2nd February 2016, limited edition of 300 copies.