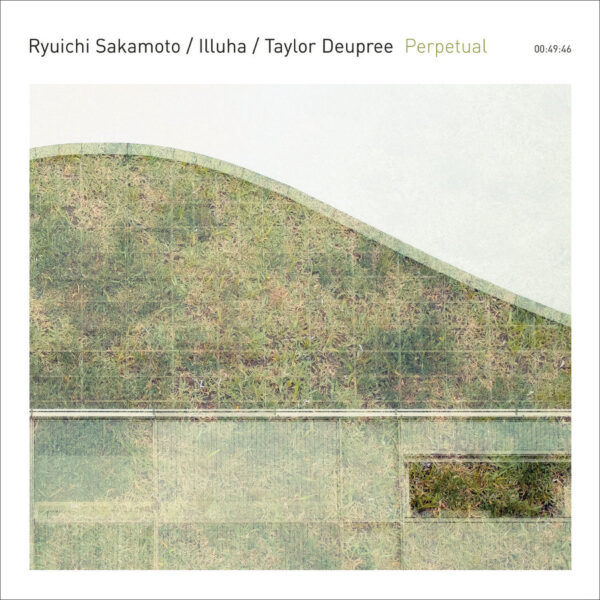 This disc is housed in a beautiful and enticing gatefold sleeve; the design printed in muted grey-greens on a good quality textured card stock; really a beautiful thing in the hand. Illuha are Corey Fuller and Tomoyoshi Date and they already have three of their own records on 12K; Shizuku, Interstices and Akari. Fuller plays guitar and pianet, augmented with electronics, while Date claims responsibility for pump organ and “noises” as well as more of the ubiquitous electronics. Taylor Deupree, who uses a modular synthesiser here, is pretty prolific and enjoys a good collaboration; as you probably already know he also has previous releases on 12K plus albums on labels such as LINE, Raster-Noton, and/OAR, Mille Plateaux, Room40, but since about 2010, mostly 12K, including his 2013 collaboration with Sakamoto, Disappearance. Here he plays modular synthesiser.

I was going to write something along the lines of “…It’s good to hear the familiar timbres of Ryuichi Sakamoto’s synthesiser patches on these three pieces of music: “Movements 1, 2 and 3”. Sakamoto’s patches are like a family friend’s old dog you’ve known since it was a puppy or a familiar aunt’s cardigan. They are reassuring. I’ve been listening to them since his soundtrack to the film Merry Xmas Mr Lawrence back in 1983 it seems. To me, some of Sakamoto’s sounds on this album are reminiscent of the ones he used on David Sylvian’s piece ‘Steel Cathedrals’ on Sylvian’s 1985 album, Alchemy – An Index of Possibilities …” but it actually transpires that Sakamoto plays only piano – treated and untreated – on Perpetual. So it must be one of the other guys making a knowing nod towards Sakamoto’s unique oeuvre. Glad I spotted that. Could have been embarrassing. Or maybe I’m simply investing so much personal significance onto his music that I like to think the sound of the poor man eating his lunch might be recognisably “Sakamoto-ish”. So anyway: as you can tell, Sakamoto’s music has in some small way been a perpetual presence in my life, you could say.

“Movement 1” has a tinge of Brian Eno’s Music For Airports about it; but barely that. I feel like I’m hearing things that sound like Music For Airports all the time. Maybe I am. My wife watches a lot of television in the evenings. “Movement 2” includes raw recordings of cymbals and voices – by “raw” I mean they sound unprocessed – and, mixed low in the mix as they are, add a very satisfying grain to the music as a whole. “Movement 3” carries on pretty much where “Movement 2” left off. I would go as far as to say Perpetual has the feel of one long session edited into three passages in post-production, although this may not actually be the case. This album is like an evening spent in a comfy armchair, watching the fire with a good quality Scotch in hand, in a quiet, welcoming, old-fashioned country public house. Possibly with someone’s large dog asleep at your feet. Somewhere you don’t want to leave in a hurry. But in the same way you are abruptly sent out into the rain by the landlord at 11:10; when Perpetual fails to live up to its name and finishes at 49:46, not only are you suddenly and unexpectedly outside at the mercy of the weather, you are also left pleasantly foggy in the head by the whole experience. Don’t forget your big coat.