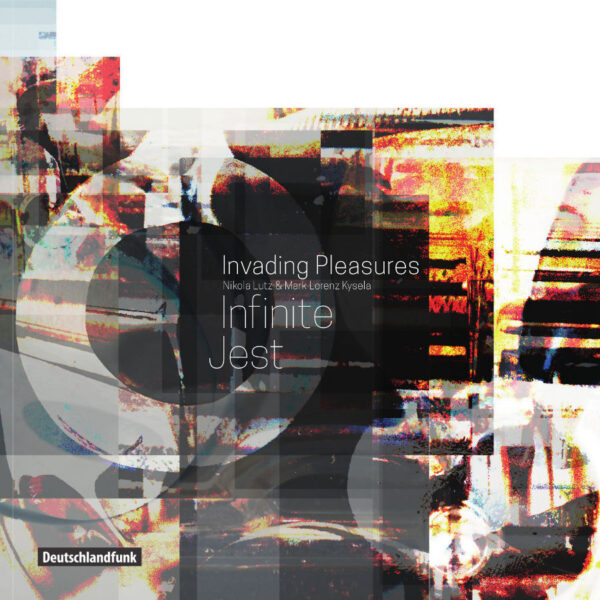 Intensive exploration of the possibilities of the saxophone in modern music on Infinite Jest (GRUENREKORDER Gruen 156). The duo Mark Lorenz Kysela and Nikola Lutz, calling themselves Invading Pleasures, are consummate players dedicating to pushing envelopes and expanding the boundaries of what is considered possible to play on the saxophone. To that end, here are six compositions and situations set up to test their mettle, including works by Uwe Rasch, Malte Giesen, Remmy Canedo, Joseph Michaels, and Lutz herself. They treat the sounds of their instruments extensively with live electronics, play multiple instruments at the same time, and draw no lines between composition and improvisation. The works here are heavily annotated, but these notes mostly describe the elaborate processes involved in their creation; one of them uses graphics scores derived from photographs, another piece doubles up the instrument pitches with “Midi sounds and meaningless speech”. Still another boasts that it is “about sound meta-annihilation, abstract violence, broken lines and tempo shifts” and goes on to quote Georges Bataille. In short, I know when I’m outsmarted; this release is far too intellectualised and hyper-musical for me to derive much enjoyment from it, and while one can admire the skills on offer and the unusual sounds created, the operation feels far too poised and contrived, and the music emerges as something cold and clinical in its perfection. The work doesn’t appear to be about anything, other than the process by which it was created, and the musicians’ ability to play it. From 26 January 2016.