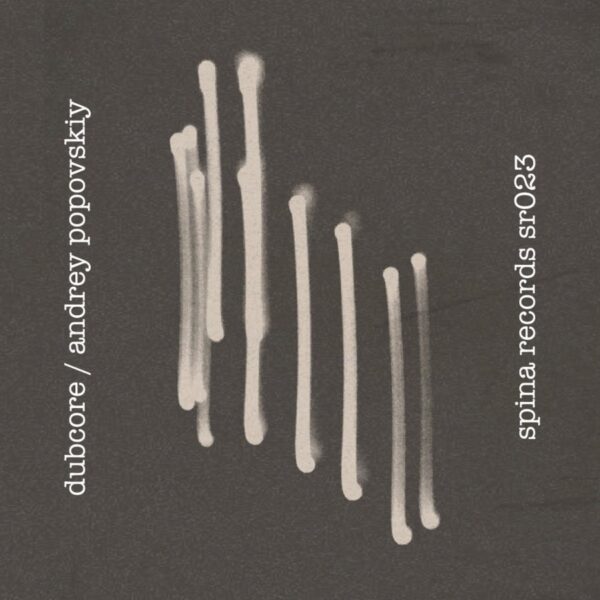 Herewith the latest three cassette releases from Saint Petersburg’s finest underground label Spina!Rec, delivered here on 10 March 2016. As ever, the editions of physical product are tiny, and collectors of cassettes will have to move fast.

SR023 is a split betwixt Dubcore and Andrey Popovskiy. Dubcore sounds more like it ought to be the name of a label, or a genre, but here it’s an art project which experiments with found sounds and/or field recordings. They offer two pieces under the heading ‘Tea-N-Pepsi’, an endearing latterday cafe society proposal if ever there was. ‘Tuning In’ is a delicious jumble of sources, a fractured radio broadcast. Nothing spectacularly new in the approach of cutting up and random assemblage, but I happen to like the results on this occasion. The creators are genuinely capable of surprising the jaded listener with their juxtapositions and exciting cross cuts. A distinctly urban feel emerges; railway stations, media messages, street sounds, electronic noise, static, and beats. Everything is served up in aggressive micro-second slices, pandering to the minuscule attention spans of our atrophied brains. ‘Theyyam’ by Dubcore feels slightly less paranoid and tense, even admitting the possibility of some pastoral undercurrents, and quieter passages, to the overall mix of unpredictability. Here the listener is intrigued and puzzled. While not as subtle or inventive as the tapes we get from Staaltape and Rinus van Alebeek, Dubcore are operating in much the same area. “Six multilayered tracks full of sounds and changes,” is the description from the website, adding that Dubcore began life as something to do with exploring long tracts of silence. It so happens this tape is the exact opposite of that strategy, and has resulted in a glorious clutter of sonic detritus. A nice one.

Andrey Popovskiy occupies Side B with his 30-minute epic ‘Kryukov’. If credit list rings true, Popovskiy is operating various chunks of hardware for playback of pre-recorded elements (turntable, cassette player, dictaphone, CD player, etc), plus a violin, and e-bow, and additional field recordings. Hard to detect much of this equipment on the finished product, though. It comes across rather like 30 mins of a fellow stumbling about the room not really knowing what to do next, like a lethargic musician trying out ideas, opening the window, or turning the TV on. The recording doesn’t present the music, but documents the event, so that we pick up a good deal of room tone, random sounds, TV or radio in the next room, and general atmosphere of life in a Saint Petersburg apartment. This description may make it all appear infuriating and trivial, but in fact ‘Kryukov’ is a compelling listen. “Different kinds of interaction with environmental sounds,” is how the website describes this episode; “sometimes you can hear contingently appearing sounds of spaces, sometimes it’s prearranged processed recordings.” A lot to explore and get lost inside, varying textures, stories, and effects. 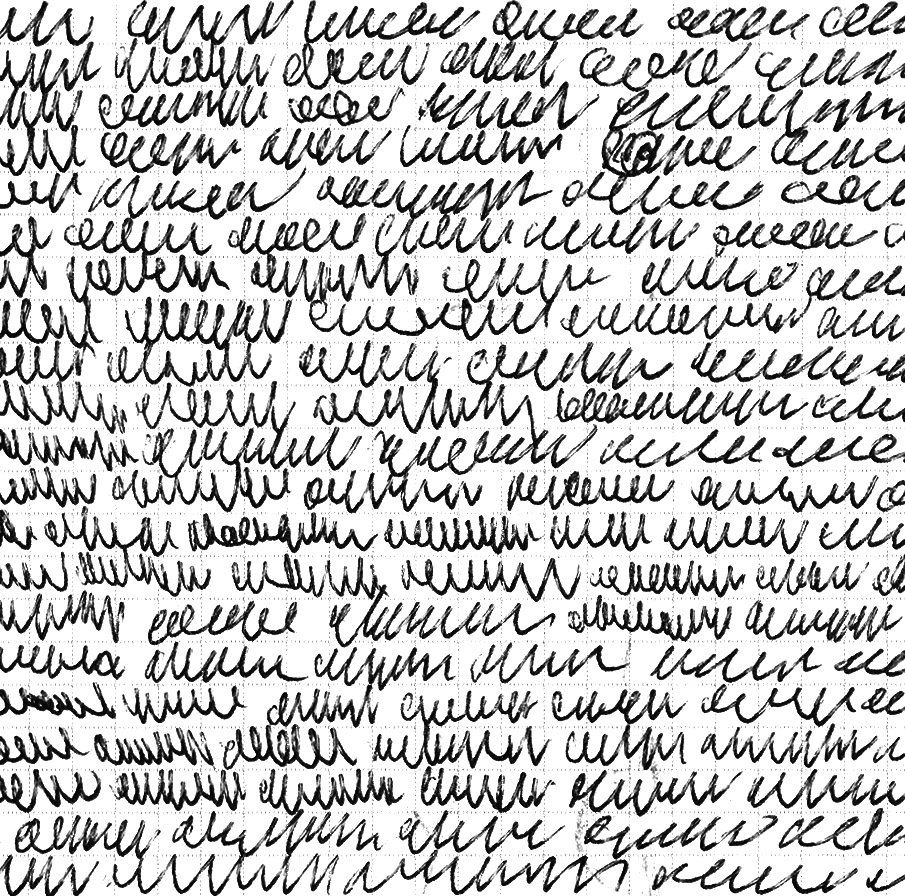 Open Readings (SR024) is a high-minded attempt to reclaim historic culture from the forces of Evil: “Barbarization of content, devaluation of moral and spiritual values and denial of cultural archetypes” are the declared Enemy, though the perpetrators don’t go into more detail about how this pernicious effect is coming about, or who are the agencies wreaking this vandalism. Are they talking about the media, television, movies, newspapers, the internet? I suspect many forces are culpable when it comes to dilution and bastardisation of culture. The retaliation from the Russian underground comes in the form of the spoken word, readings from “works of the best classical writers of the Silver Age”. In Russia, the Silver Age is the beginning of the 20th century, a highly productive time for experimental poetry, modernist novels, and short stories. On the A side, it’s done by Alexander Mashanov & Ilia Belorukov, who on ‘Blok’ (most likely named for the poet Alexander Blok) belt out short phrases and paragraphs, spoken in Russian, of course, as if words were weapons, to be fired like bullets from a gun. Inevitably, this approach soon develops into a clumsy form of rap music, the rhymes chanted aggressively over a clunky drum beat and tepid electro backing. In less than 11 mins, we’re barked to death. On the B side, the readings are done by Natasha Shamina with a musical backdrop by Sergey Kostyrko. Their ‘Vvedenskiy’ is less contrived than ‘Blok’, and instead of rapping the reading is delivered with the accompaniment of a menacing electronic growl, now and then turning into a nasty squeal, and contributing to the overall tension. The sense of purpose in Natasha Shamina’s steely speaking voice is unmistakeable; she may not be firing bullets, but you sense she’s staring at you with a disapproving eye, and is capable of acting as a silent assassin if the situation demands it. I prefer this B side; it makes zero concessions to entertainment, and demands your engagement with the content. 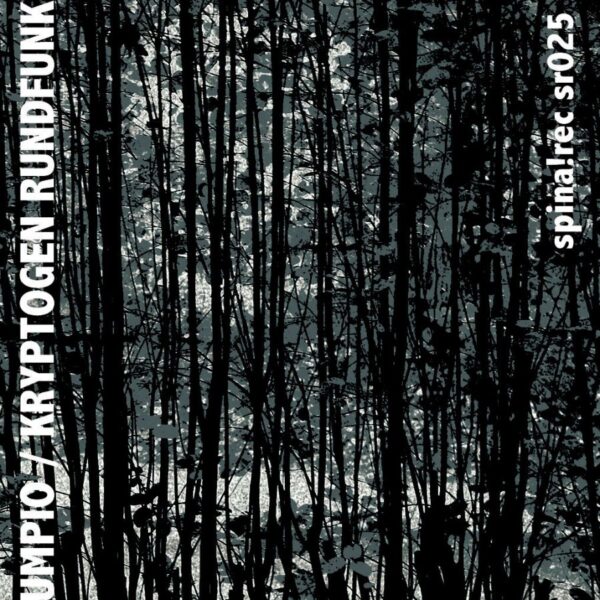 SR025 is another split and represents another chapter in this label’s friendly and ongoing collaboration with the Finnish underground. Umpio is the Finn, from Turku; Kryptogen Rundfunk is the Russian. Both are solo acts. Umpio turns in a typically over-baked stew of sounds on his ‘Rio De Venas, Gusanos, Pulso Insectal, Craneocapsula, Bajo Hielo’, and by typical I mean this is the sort of purposeless over-dubbed melange which the Finns have always done so well. This “cunning sound synthesis” as the website would have it is all done by electronic means, digital and analogue working together for that rich “swampy” sensation. ‘Rio De Venas’ doesn’t really progress anywhere, but as a half-realised vision of an alien world, it’s fairly convincing. Pentti Dassum is the fellow behind this pleasing gumbo, and he runs a record label called Nekorekords and was involved in the mastering of over 100 Finnish underground releases, besides the production of about 40 of his own solo records and split releases.

Kryptogen Rundfunk offer us a live recording from 2015 from a venue or event called ESG-21. Feedback and electronic noise are used to create slow and doomy textures…they lurch gradually out of the speakers like so much tar-encrusted sludge, and the outpouring won’t stop until every available surface is covered in this unpleasant morass. Some occasional nice effects are achieved by Kryptogen Rundfunk’s remorseless execution, but in the final analysis he creates the sort of environment that drives you away rather than invites exploration. Dank, grey, gloomy; saps the vitality of most humans, kills many forms of plant life, poisons the air. Artyom Ostapchuk is the creator of this dismalness, and he has made a few sporadic recordings of his brand of industrial ambient death music since 2004 onwards.