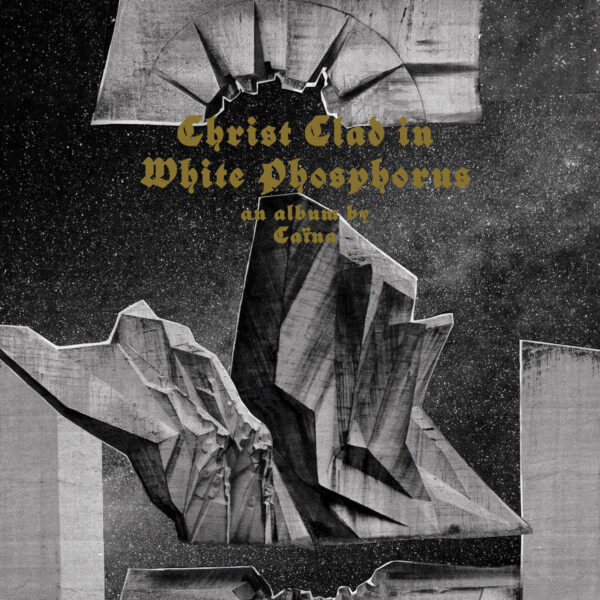 Since reforming in 2012, Caïna continues to do no wrong from this listener’s viewpoint as it evolves from Andrew Curtis-Bicknell’s solo project  to a three-member band and the music shifting from black metal / post-BM to a black metal mixed with industrial, dark ambient, noise electronics and 80s-styled darkwave / synth-pop influences. In my little world at least, every new album release from Caïna is an event not to be missed.  Listening to Caïna’s recordings isn’t easy and most of them can be very hard-going, and not just because they can be long or because they can be so unpredictable. There is much emotional pain revealed that can resonate with dark moments in most people’s lives and a listener would have to be either dead, comatose or sociopathic not to be affected by moments in Caïna’s albums to the point of tears.

From the hellish industrial nightmare ambience created by opener “Oildrenched and Geartorn” through intense raw garage black metal filled with rage and a desire to destroy everything within hearing range in tracks like “Fumes of God” and “Entartete Kunst”; doomier and darker melodic pop-song tracks like “Gazing on the Quantum Megalith” and “God’s Tongue as an Ashtray”; the noise / dark ambient soundscapes of “The Throat of the World” … the sonic universe that arises is incredibly vast and varied yet it all crackles with energy and a malevolent spirit. If anything, there might be too much going on here (for a 53-minute album) with Caïna jumping from one style of music to another through songs that are often just 4 – 6 minutes which may not be enough time for many listeners to fully savour the sounds, the emotions, the fury and intensity of one song before they are hurled into another.

Just when you think Caïna has gone past the halfway mark and can do no more, the band goes to another level with pieces like the fusion dark ambient / jazz of “Pillars of Salt” and the harsh blizzard 90s-Norwegian styled black metal of “The Promise of Youth”. These send us to the unreal blinding-white dazzle ambient world of static and white sizzle noise that is “Extraordinary Grace”. Have we all died and gone to Heaven to meet our maker and hear the judgement to be pronounced upon us? In an album already jam-packed with experimentation and investigations into angst and melancholy, this near-psychedelic track, lasting for 12 minutes, is an astounding discovery, the proverbial diamond in a heap of black coal. This quartet of songs ends with the title track which with clean vocals, shrill guitar melodies and pulsing synth accompaniment, sounds like a noisy black metal reworking of a 1980s Goth synth-pop song.

For a band that at one point in its past almost did away with black metal completely, Caïna commit themselves to the black art with the force and aggression that comes from being fully invigorated with the music again. Perhaps bringing on board guest vocalists on previous album “Settler of Unseen Snares” and a permanent vocalist and another musician has inspired AC-B anew. Caïna’s sound is fuller, more blood-red raw and intense than I remember from earlier recordings.

Coupled with excellent production, this album presents a reborn Caïna that is at once experimental and at the same time surprisingly accessible with songs possessed of catchy tunes and beats, all arranged in a way that shorter, more conventionally oriented BM tracks (well, relatively speaking of course – we’re talking about an act whose work has always spanned several genres) come first before the more surreal pieces. It can be a lot to take in and several songs are very uncompromising in their aggression and intense delivery. This is an album that repays repeated hearings: with each spin, you may find your darkest fears and vulnerabilities exposed anew.

At this point, if Caïna never do anything else again, the band will be leaving behind a legacy of great if not always perfect albums. I rate Caïna among Britain’s greatest rock music exports, and that is really saying something even now with so much British pop and rock music in apparent decline.