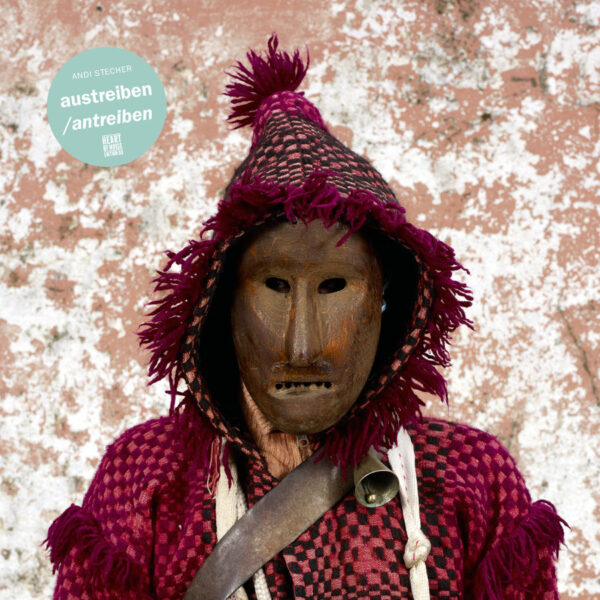 Having recently enjoyed Charles Fréger’s enthralling Wilder Mann, imagine my delight at finding one of his “Images of the Savage” staring at me from the cover of this release. It’s the face of a visitor from the deepest, most primal levels of the human psyche, and that’s pretty much what the music sounds like too.

Andi Stecher is an Austrian born, Berlin based drummer, percussionist and electronic musician. This album was specially commissioned for the Innsbruck Heart of Noise Festival in 2015, and is Stecher’s own response to the same Central European mask traditions that Fréger documents in his photo collection. Essentially a solo release, he’s helped out on a couple of tracks by double-bassist Antti Virtaranta and ululator-in-chief Otto Horvath. Together, these wild things make everything groovy, in a ritualistic, shamanic kind of way.

Proceedings open with ‘(un)durchdringbar’, tintinnabulating bells laying down a primitive rhythm from which a more sophisticated groove emerges, as the double bass kicks in and the whole thing builds to a crescendo of cymbals. It’s as if the first part of the track has been designed to invoke the second part. Or perhaps we’re looking at one of those evolutionary diagrams showing the ascent of dance music, from Homo Habilis be-bopping on a lump of rock to Homo Sapiens programming a drum machine.

Two short pieces follow that – ‘möglicher zugang übergang 1’ and ‘2’ – which feature the Horvath vocal chords doing what comes unnaturally. The final track, ‘Tödi’, has a similar structure to the first track, as the jolly sounds of a folk festival dissolve only for a groove to re-emerge from the chaos. The tintinnabulations return, like a commodius vicus of recirculation back to Howth Castle and environs, bringing us back to where we started.

A remarkable blend of ancient and modern that creates some timeless moments. One for the wild at heart.