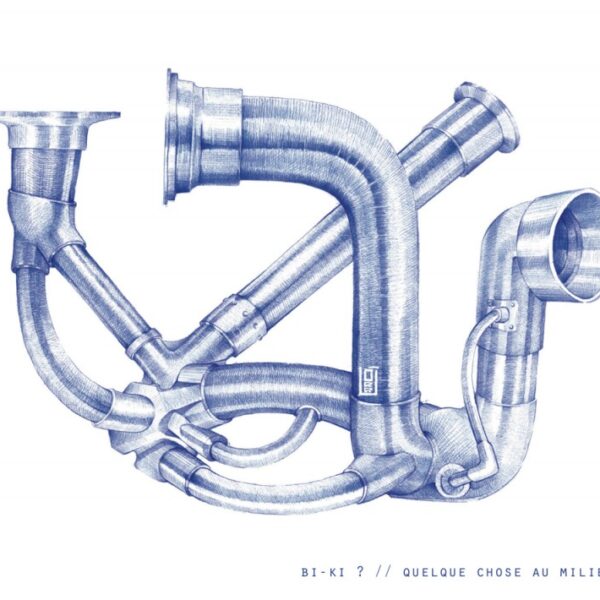 Another great piece from Jean-Luc Guionnet, the French fellow who first crossed our pathway with his church organ experiments, but is also a saxophone improviser and a very good sound artist. On Quelque Chose Au Milieu (CIRCUM-DISC LX008 / BECOQ RECORDS 25), we have a strong collaboration with the alto saxophone duo Bi-Ki?, who are Sakina Abdou and Jean-Baptiste Rubin. The duo played in various very specific locations around Lomme in France, and Guionnet recorded them – here credited with the very precise French term “prise de son”, and he also did the editing and mixing. The locations are one half of the pleasure to listening to this record, mostly chosen for their sonority and possibility of natural echo, I suppose, but it’s also nice to hear background sounds becoming part of the music too. Said locations include a municipal swimming pool, a church, a hotel, a market, and a bridge near the motorway.

As I write these lines, it seems I’m making out that Quelque Chose Au Milieu is merely an “interesting” process piece, but somehow I find there is more substance to it which I can’t readily account for. It might be the photographs in the insert, which although they’re documenting the actions of the recordings, are both strangely evocative and seem to be documenting something else altogether. I like the way that the figures of the artists are, in a couple of images, rendered as mysterious while silhouettes, as if they were missing persons. And the lovely blue colour of the printing may also be adding to my delusional rhapsody. There’s also an explanatory line or two describing the genesis of the works, printed in French, but I think the gist of it is that Bi-Ki? have always been preoccupied with “la question de lieu”, the question of a place or location, and how to express it in recorded sound. This collaboration with Guionnet is their response to the problem.

In short: very enjoyable long slow saxophone drones arising from pure improvisation, and tied to their locations through a combination of preparation, selection, good recording techniques, sensitivity to the environment, and strong ideas. All of this means that Quelque Chose Au Milieu is not simply nice music with field recordings added on, which anyone could do (and these days, everyone and his brother does precisely that). From 11 April 2016.