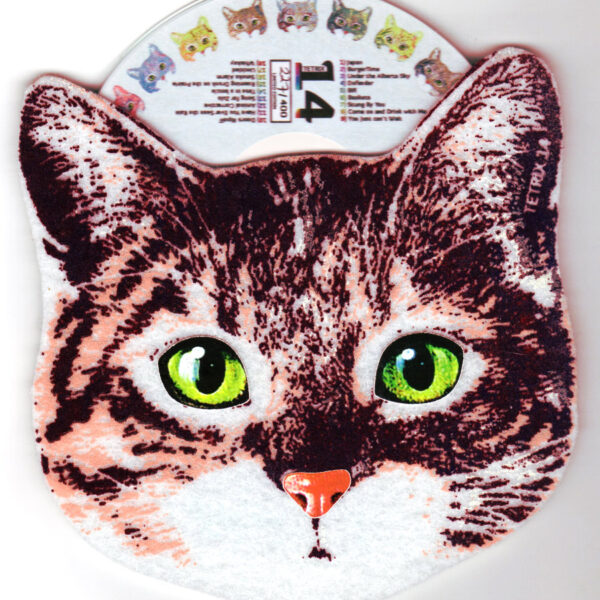 Here’s the latest release from Tetrix, the oddball Canadian pop-experimenters from Calgary. Recent releases have been vehicles for radio plays, where the band would splice their warpoid pop songs into a sustained narrative complete with sound effects, characters, and unexpected payoffs, almost creating a mini-movie for the ears. With this new Cat-Headed item, which may be called Tetrix 14, the band write to say “we’ve returned to the basics…just music, no radio play”. Accordingly here are 18 songs segued together in a loose suite, and it’s a very satisfying listen. No annoying “wacky” cartoon voices getting in the way and it’s possible to concentrate more on the music.

Tetrix can’t help parodying and pastiching, and on this occasion we hear quasi-psychedelic songs, electropop, acoustic ballads just dripping with too much fake echo, cod-reggae, rap, and their white-bread idea of how to do R&B / soul songs…it can come across as contrived and synthetic, and this is no doubt why Tetrix are perceived to be insincere pranksters, but if you draw this conclusion too hastily you will miss out on some finely crafted pieces of work. They are skilled musicians, and know how to construct a song using old-fashioned craft; under the plastic surface of the over-cooked studio effects, there is real passion and emotion in the singing, and many of these pieces are genuinely affecting.

Tetrix have a facility which many would envy; perhaps it goes too far, and they find it so easy to construct a song that they have to set themselves the additional challenge of doing it in a different style every time, just to keep themselves fresh. I know that Frank Zappa would discipline (some would call it “bullying”) his touring bands to the point that they had not only learned all the material by heart, they could play the same tunes in a half-dozen different tempos and styles, all based on the finger-pointings of the musical director. Natch, this being Zappa, said musical styles were often heavily parodic and full of audible sneers, especially when he and the band attempted to play in a “reggae” style. Without knowing the musicians in Tetrix personally, I would like to think they’re not pursuing the same agenda as that Grand Cynic.

If you like melody, songcraft, songs and tunes – all given a strange twist by a very curious and unusual approach to studio production – then permit me to recommend this album. As usual with this band, they have opted for a zany shaped cover for a limited edition CD. “The cover is a three colour silkscreen (yours glows in the dark),” states the accompanying letter. “It comes in 35 colour combos!” From 26 April 2016.