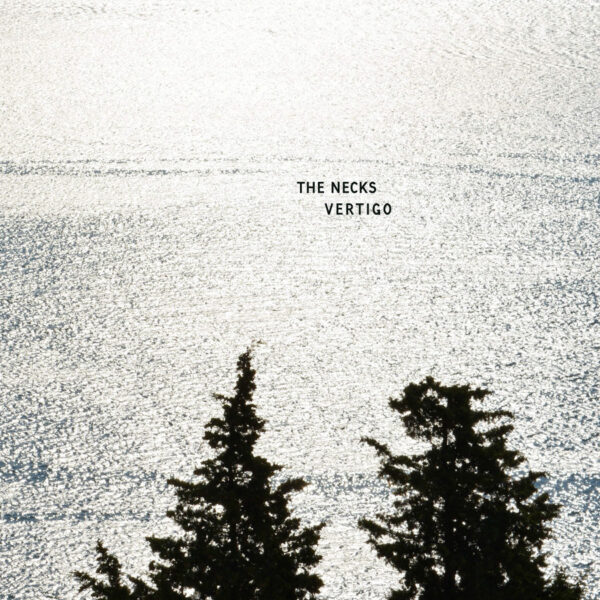 Those familiar with The Necks’ recent output will recognise the ingredients; watery rotary speaker-processed Hammond organ, sampler glitches, sinister bass tones, hard-edited reversed drum hits, cymbal shimmer, playful long duration, repetition and slow, relentless real-time development of a theme. This remarkable Australian trio – pianist Chris Abrahams, drummer Tony Buck, and Lloyd Swanton on bass – take the classic jazz piano trio format and subvert it. As an important component of the Sydney music scene over the last twenty-odd years, all three have also regularly performed as part of more recognisably “straight jazz” projects as well as operating as session musicians and enjoying opportunities to follow their own individual paths. The fact that they still come together and can produce sessions of this quality tells of a shared musical pursuit that may be very close to a compulsion.

Vertigo is apparently the Necks’ eighteenth album. That’s some achievement for a group concerned only with pure improvisation operating in a commercial field. The fact that a project as outstanding as this has come out of a country whose popular music history has often been unfairly presented by some in the music press as being relatively unremarkable, is in itself faintly bizarre, yet pleasing; not to say surprising. They seem to have never put a foot wrong; from 1989’s debut Sex to what I have here on my desk today – there’s a sense of continuity and achievement to their work. In particular, they have been successful in presenting their own unique brand of freedom. According to the album’s press release, the Necks are “…powered by an idea”. Their idea is to perform music which has little pre-ordained about it. Improvisation in jazz is nothing new of course. But it’s kind of how you do it that counts. In the world of piano trios, the Esbjörn Svennson Trio knew what they were doing, for example, whereas arguably The Bad Plus don’t.

Vertigo is one 44-minute improvisation. As always, The Necks “…explore the development and demise of repeating musical figures…”, as their Wikipedia entry explains. And there’s something Lovecraftian about it. The recording begins fairly subdued, yet with simmering purpose; when the electric piano comes in out of nowhere at 15:14 it’ll give you the heebie-jeebies. Throughout, the music is suspenseful; it promotes a sense of unease in the listener. It’s not overt – it’s just a feeling that there’s something unacknowledged and nameless contained within; or within the listener, even; waiting to get out. The trio drive the music on; not forcibly, but with clear deliberation, and as relentlessly as a summer gale. It is elemental; like fog at twilight or a sea mist. Not all boats that leave port return home safely. Rotary speakers are dashed on the rocks. The final few minutes are like dinner party music; for when the hors d’oeuvres get served round at Cthulhu’s house. Indeed, there is an inscrutable photograph of a large body of water adorning the sleeve, so I reckon I’m not far off imagining the tentacles.