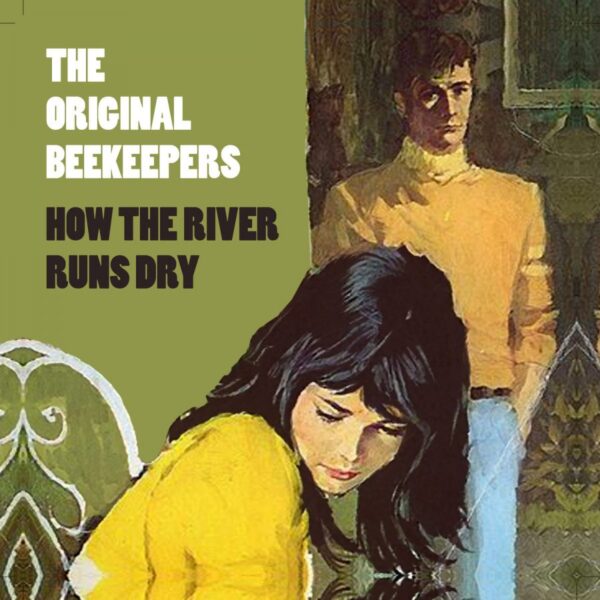 If I was doorstepped by some earnest musicologist, I’d have said that listening to the London-based Bees showed a quintessentially English songwriting outfit that was possibly riding on the coattails of Martin Newell’s Cleaners from Venus and/or the rather plush garden shed demos found on XTC’s Homegrown c.d. However, it appears that the O.B.s (a.k.a. Tom, Steve and Ash) have been in existence (initially as The Shammy Leathers) since 1984 (!), having amassed nearly five hundred home recordings. So… they were closer to being near contemporaries to Andy Partridge’s combo and the Venusians than was previously thought!

Issued in a decidedly miniscule edition of fifty copies, …River… is a ten track conceptual work where the interrelated numbers tell a story of everyday folk down Suburbiton way. And cracks start to appear fairly early on in this diorama, the title track’s male/femme trade-offs coming to a head with vocalist Denise’s kitchen sink musings, “This life’s not mine” becoming the most telling line of all. Though having zilch to do with Scandinavian black metal, “A Church is Burning” is the punchiest number here and the one imbued with a crazy logic of its own, with an extended and frenetic sitar solo coming straight out of nowhere. “Breaking Down”, like the previous, assimilates certain eastern elements with the brassy blare of “The Hornsey Horns” evincing the woozy, loping gait of Soliman Gamil or indeed those of the Ethiopian school.

Unusual as it is to let the group review its own wares, their claim that …River… is “probably their best and most consistent work since 2002” seems pretty damn on the mark. Painfully obscurist fare admittedly, but this is my kind of pop.